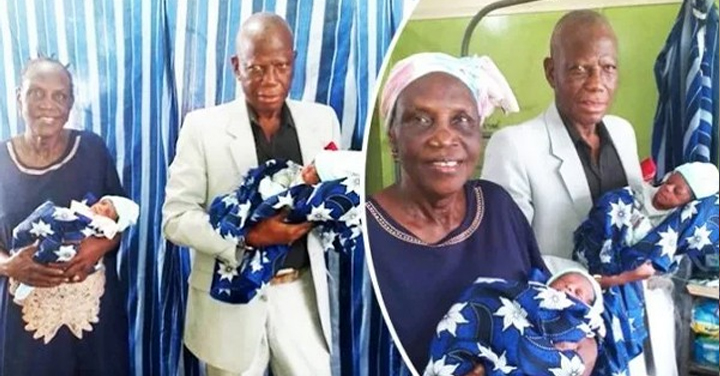 Margaret Adenuga, 68, and her husband, Noah, 77, waited 46 years to finally be parents. They got married in 1974 and have always wanted to have children.

Despite a long and difficult journey to this end, in which they repeatedly failed, they never gave up hope. “I have a dream and I believe our dreams and desires will come true,” said Noah, who is now retired.

“I never lost hope, not for a single day. I always told Noah we would have a baby before we moved out. That baby will leave with us. Not even a baby. There will be two. I am a church attendant, and I have seen in the church with much certainty that there is nothing God cannot do. That’s why I believe that. I have stuck to my faith that God will give it to us,” Margaret said.

And the couple finally realized their dream, becoming the proud parents of a little boy and a little girl. The twins were born by ᴄᴇsᴀʀᴇᴀɴ sᴇᴄᴛɪᴏɴ in the 37th week of pregnancy last April in Lagos.

READ ALSO: Meet Violet Edwards – The Oldest Black Woman In The U.S To Graduate From College At Age 96

The doctor who delivered the birth, Dr. Adeyemi Okunowo, said that because Margaret was at increased ʀɪsᴋ due to her age, she was monitored by a group of experts throughout her pregnancy.YOU MAY LIKE:  “They Are Still Children”: 3 Secondary School Girls With Impressive Beauty Goes Viral, Video Emerges

“As an elderly woman experiencing her pregnancy for the first time, it was really a big ʀɪsᴋ. It also contributes to the fact that the babies are twins, so we had to pay attention throughout the pregnancy,” the doctor said.

“At a late age, pregnancy has certain health ᴄᴏᴍᴘʟɪᴄᴀᴛɪᴏɴs, such as ᴘʀᴇᴛᴇʀᴍ birth. Margaret was lucky in this respect, but the possibility of postpartum ᴄᴏᴍᴘʟɪᴄᴀᴛɪᴏɴs still exists,” added Dr. Adeyemi Okunowo.

Margaret and Noah are very happy anyway. After 46 long years, their dream has finally come true.