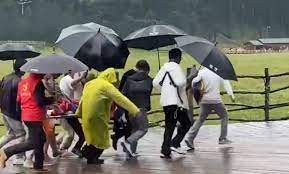 A groom-to-be has died after being struck by lightning while posing for engagement photos with his fiancée in a popular tourist spot in China.

The man identified as Ruan, was hit by a lightning bolt during a wedding photoshoot with his fiancée at the Spruce Meadow, a popular scenic spot. He was rushed to hospital where he was pronounced dead, South China Morning Post reported.

Before the lightning struck, Chinese authorities reportedly issued a yellow weather warning, the third highest in the country’s weather system.

Despite the thunderstorm, the couple decided to go ahead with their planned photoshoot.