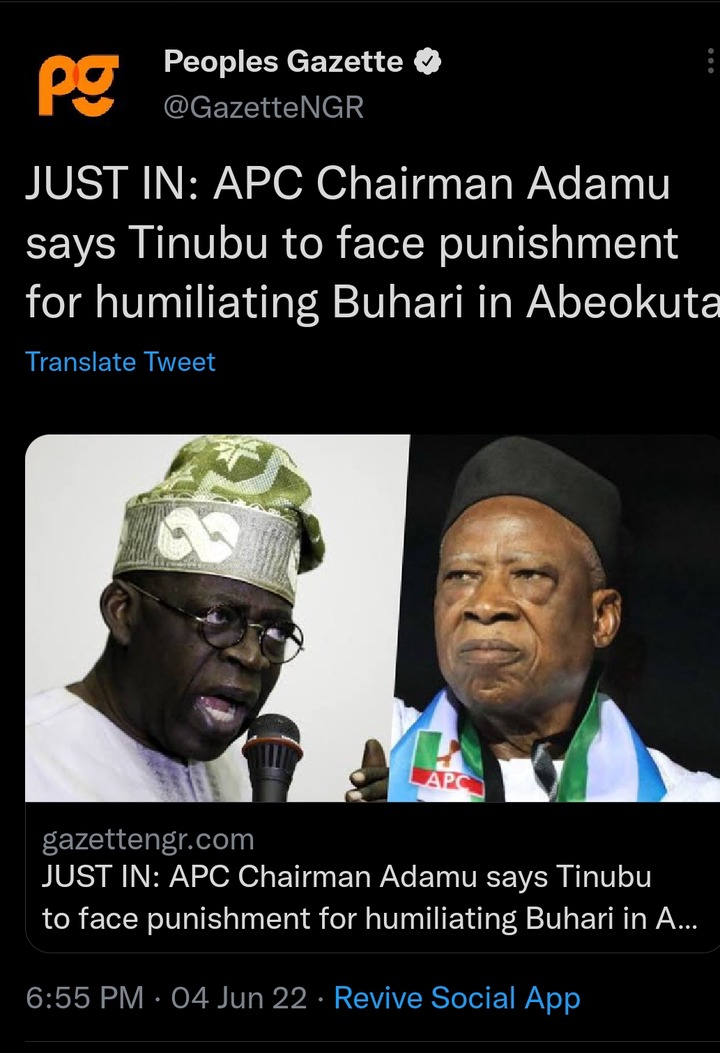 Tinubu To Face Punishment In Abeokuta

The ruling All Progressives Congress may activate disciplinary action against Bola Tinubu for his explosive comments against President Muhammadu Buhari on Thursday, party chairman Abdullahi Adamu said on Saturday.

Mr Tinubu had while meeting APC delegates in Abeokuta said he brought Mr Buhari to power after the Nigerian leader cried on television and vowed not to run for office again.

Mr Tinubu apologised for his comments and retracted them on Friday. But reacting on Saturday, Mr Adamu said Mr Tinubu’s apologies were not enough. The members of the vigilance group guarding the Timber shed market at the Federal Housing Estate in Abuja had wanted to arrest some residents wandering around the market in the early hours of Saturday.

According to some residents, the men appealed to the vigilance group to free them in the name of Allah but one of the vigilantes kicked and made comments said to be blasphemous and insulting to Allah.

An eyewitness who spoke on anonymity confirmed that the vigilante was beaten and stoned before he was set ablaze by the mob. 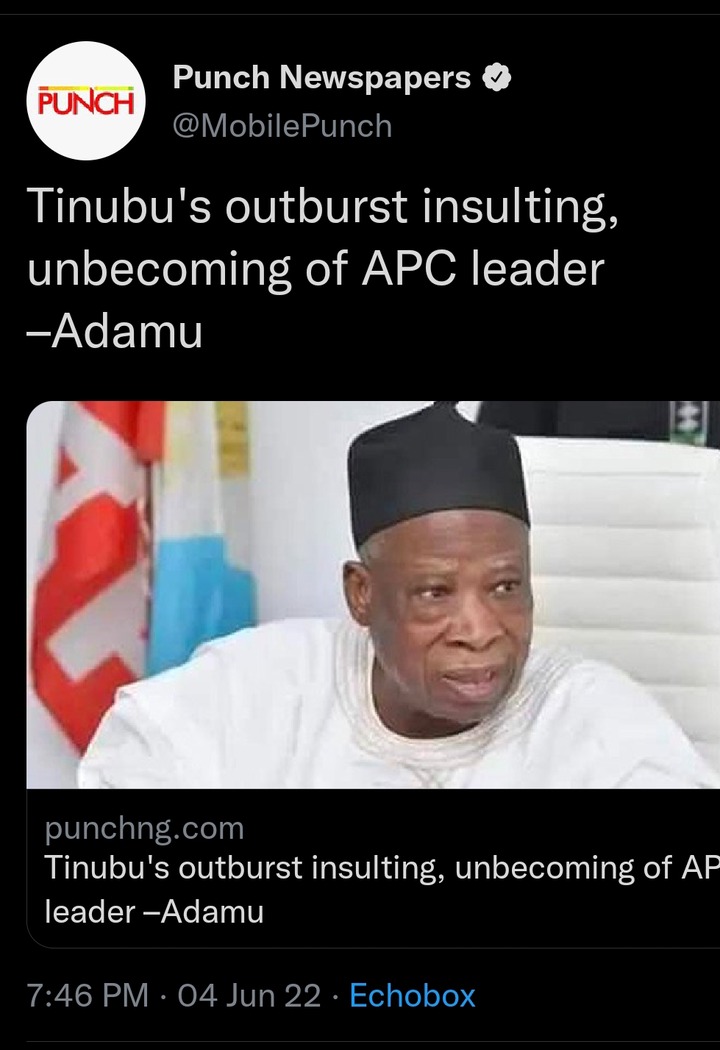 The leadership of the All Progressives Congress has thrown its weight behind the President, Major General Muhammadu Buhari (retd.), following the scathing remarks of a presidential aspirant and the National Leader of the party, Asiwaju Bola Tinubu.

Tinubu had while speaking to the party’s delegates in Ogun State on Thursday claimed that without him, Buhari would not have become president in 2015.

He also narrated the circumstances that led to the emergence of Prof. Yemi Osinbajo as the vice president, saying Buhari had offered him the running mate ticket, but some party chieftains opposed it.

Reacting to Tinubu’s comments, Adamu stated that the former Lagos governor’s outburst was unbecoming of a leader of his stature, adding that the party found his latest attack on the president insulting.

The Returning Officer and Chairman, Governorship Primary Election Committee, Mr Murtala Damagum, announced Mohammed’s victory at the end of the exercise held on Saturday in Bauchi.

He said that Mohammed as the sole contestant in the election polled 646 votes.

Damagum said that 650 out of the total 656 delegates were accredited, while 646 votes were cast, adding that the election was free and fair.

The re-scheduled governorship primary is a sequel to the voluntary withdrawal of Ibrahim Kashim, who won the May 28 election in the state.

Some of the teachers who participated in the recruitment examination in Anambra State have expressed dissatisfaction over the malfunctioning of the website.

The crash of the website 30 minutes into the exam as was gathered by our correspondent on Saturday, which caused wide complaints among the participants.

One of them who identified himself as Kenechukwu Ibe, lamented that they were 30 minutes into the exam when the site went off, thereby causing disruption in the process.

However, the Commissioner for Education, Ngozi Udeh, debunked the claims, saying that nothing of such happened, while lamenting that she had received over 3,000 calls within one hour “over matters arising” from the claim.