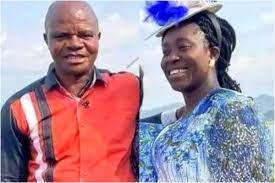 Peter Nwachukwu, the husband of the late popular gospel singer, Osinachi, has said that contrary to public opinion, his wife died of lung cancer and not from the beating he is alleged to have given her over time.

Nwachukwu had been in detention for over a month for allegedly killing his wife who died in April.

The Office of the Attorney-General of the Federation and Minister of Justice had on Friday, June 3, arraigned Nwachukwu on a 23-count charge bordering on domestic violence and homicide.

The Abuja National Hospital had performed an autopsy on Osinachi but the result was handed over to the police.

Testifying before the court, Mr. Nwachukwu, who pleaded his innocence, said;

“Let me tell the whole world, I have suffered a lot. I have been abandoned. What killed my wife was cancer of the lungs, I didn’t hit my wife.

Cancer of the lungs killed my wife, Osinachi Nwachukwu, so I’m suffering for what I do not know,” he said while being moved from the courtroom.

Despite his plea of innocence, the court ordered that he be remanded in the Kuje Correctional Facility till the end of the trial.

Nwachukwu will be in prison pending the hearing and determination of the homicide-related suit instituted against him by the Attorney General of the Federation.

The presiding judge, Justice N.K. Nwosu-Iheme gave the order on Friday after he pleaded not guilty to 23 charges bordering on domestic violence and homicide, among others.

She ordered that the suspect be remanded at the correctional facility while the trial was adjourned to June 16 and June 17.

The 42-year-old gospel singer died on April 8, after spending days at a hospital. Her husband was accused of subjecting her to domestic violence, which led to her death.

Following the incident, Nwachukwu was arrested by the police and he has since been in detention.

Nwachukwu was charged under sections 104 and 379 of the Administration of Criminal Justice Act, 2015 and culpable homicide contrary to section 221 of the Penal Code which is punishable with death.