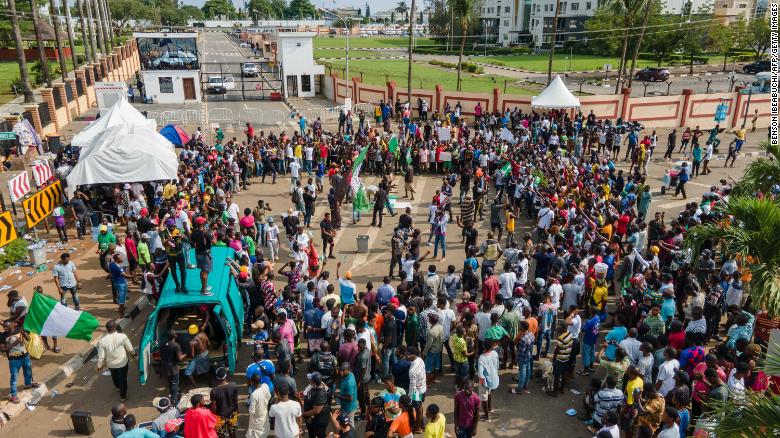 Some Christians took to the streets to protest the killing of a Sokoto student, Deborah Yakubu, over alleged blasphemy.

The Christian Association of Nigeria had earlier called on Christians to protest on Sunday (today) Deborah’s killing.

Deborah was on Thursday, May 12, stoned to death and set ablaze on the premises of Shehu Shagari College of Education by an angry mob over alleged blasphemy.

IPOB Is Not Good For Us -Umahi

Governor Dave Umahi of Ebonyi State says the Indigenous People of Biafra, IPOB, should not be welcomed in the Southeast due to their negative activities.

The governor, who is also vying for the sole presidential ticket of the All Progressives Congress (APC) stated this while playing host to leaders and members of the Nigeria Guild of Editors in Abakaliki at the weekend.

The Igbo presidential aspirants made the pledge at a review meeting of the former Minister of Science, Technology and Innovation, Dr. Ogbonnaya Onu.

Femi Ige, spokesman of the Fayemi campaign organisation, quoted the governor as saying this when he met with All Progressives Congress (APC) delegates in Makurdi, Benue state.

The presidential hopeful said he would bring an end to the farmer-herder crisis that has disrupted farming in the region.

He argued that so far, out of the total number of those aspiring for the seat on the platform of the party, only five aspirants have traveled to consult with delegates across the country.

Minority Leader of Ondo House of Assembly, Rasheed Elegbeleye, has lost out at the primary of the Peoples Democratic Party (PDP).

Elegbeleye, who refused all entreaties to defect to the All Progressives Congress(APC) lost the ticket to Akintola Olarenwaju by polling 18 votes.