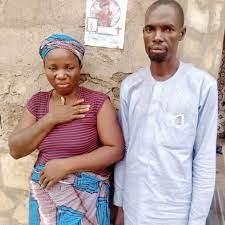 The founder of Omega Powers Ministries, Apostle Chibuzor Gift Chinyere, has said that he wants to relocate Deborah’s family to Port Harcourt and give them a new life.

The cleric stated that following the tragedy that befell them, he wants to move them over to Port Harcourt where they will be living in one of the free estates that belong to his ministry. He said that they will be staying there for as long as they want, and won’t be paying any rent.

He also added that all their children will be sent to school on scholarship, while the father will be given a job.

In the post which he made on his verified Facebook, and also shared by Vanguard, he said – “I just watched a video clip where the parents of Deborah Samuel said they will not be sending their children to school again. God forbid! I, Apostle Chibuzor Chinyere, the General Overseer of OPM church, am relocating them to Port Harcourt. They will be staying in one of the OPM free estates where they will never pay rent forever. All their children are given automatic scholarship in OPM free schools.”

In a report which was made by Vanguard, Deborah’s mother, Alheri Emmanuel, had said that she will not be sending her children to school again to avoid what happened to Deborah from happening to them too.

She said that they are not expecting anything from the government, and that she believes God will take control of everything.

Deborah was their eldest child, and was a 200-level student of Shehu Shagari College of Education, Sokoto. She was killed and burnt by her fellow students after being accused of blasphemy against Prophet Muhammad. Many Nigerians have been calling on the government to make sure those who took part in the killing are made to face the law.

Many have commended Apostle Chibuzor for deciding to help this family. We pray that may God bless him and his ministry for this.

What do you have to say about this? Please feel free to share your thoughts with us.

The popular Nigerian billionaire pastor and founder and General Overseer of Omega Powers Ministries, Apostle Chibizor Gift Chinyere sympathized with the parent of the slain student of Shehu Shagari College of Education, Sokoto, Deborah Samuel, and also decided to help the family. During the burial of Deborah Samuel, the 200 Level student of Shehu Shagari College of Education, Sokoto that was killed over the alleged blasphemy against Prophet Muhammad, her mother has vowed that none of her children will ever go to school again. Although her killing has been condemned by the concerned Nigerians and they have called for the prosecution of her killers. However, on seeing the video of her parents, Apostle Chibuzor Gift Chinyere, have decided to help the family. The Clergyman said he would relocate them from Niger State to Port Harcourt and also give them free accommodation in one of his free estates where they will never pay for rent. He didn’t stop there, he also said he would get the father a job and open a shop for the mother. Concerning the children, he said he would send them to his free school with an automatic scholarship. He however put out his words on his official social media pages for anyone that has the parent’s contact to help him find them.

Apostle Chibuzor Gift is a kind-hearted man of God and a philanthropist who has helped, several needy people. What can you say about this Clergyman’s act of kindness? Tell us your views in the comments section.