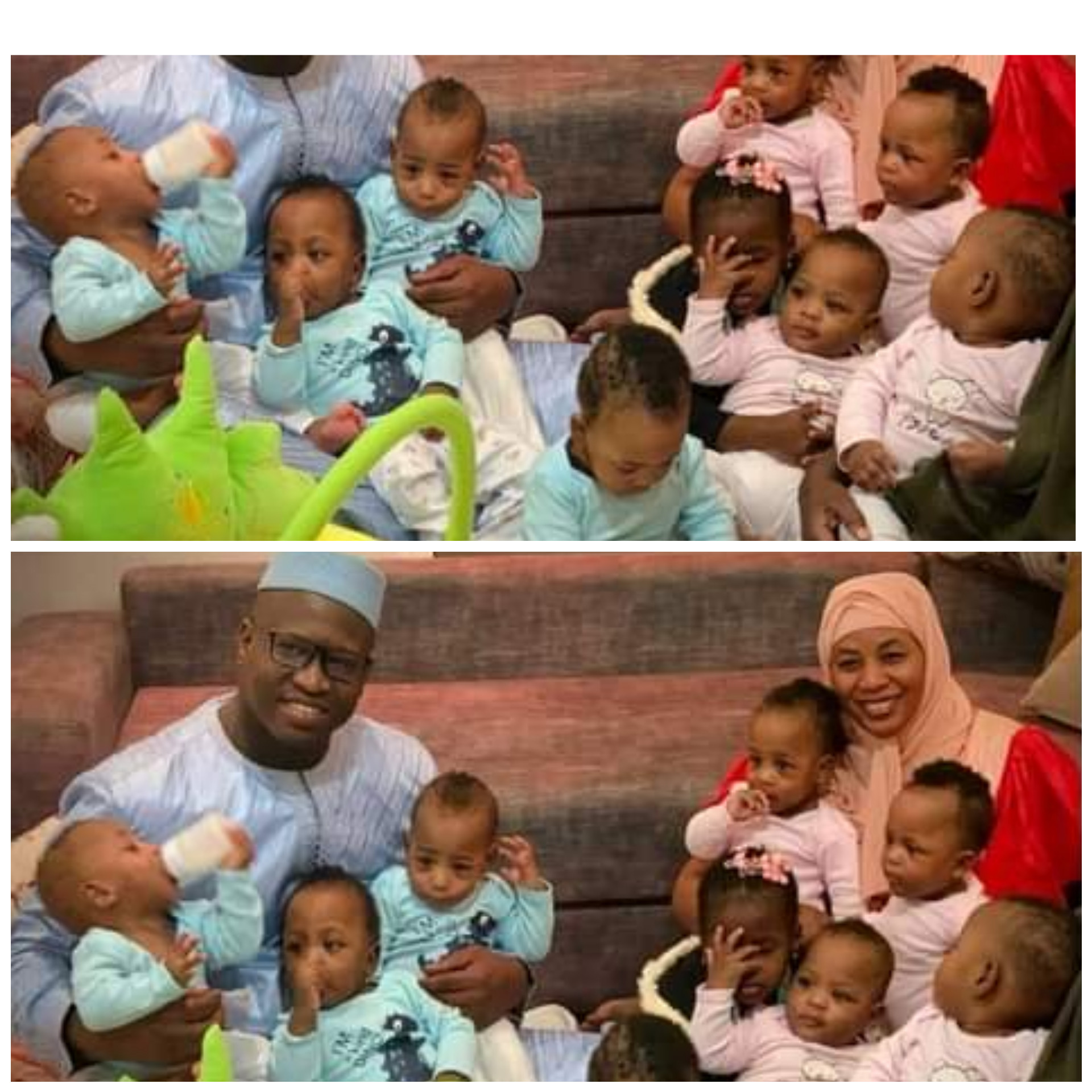 The world’s only nonuplets, nine babies born at the same time, have celebrated their first birthday.

26-year-old Halima Cissé, from Mali gave birth to five girls and four boys, in Morocco on Tuesday, May 4, 2021.

Speaking to BBC, their father  Abdelkader Arby, an officer in the Malian army, said the nonuplets are in perfect health.

“They’re all crawling now. Some are sitting up and can even walk if they hold on to something. They are still in the care of the clinic in Morocco where they were born,” he said, adding that their mother Halima, was also doing well.

“It’s not easy but it’s great. Even if it’s tiring at times, when you look at all the babies in perfect health, from right to left we’re relieved. We forget everything,” he told BBC Afrique.

He has just returned to Morocco for the first time in six months, along with their elder daughter, Souda, aged three.

“I’m overwhelmed to be reunited with all my family – my wife, the children and me.”

They will just have a small birthday celebration with the nurses and a few people from their apartment building, Mr Arby said.

“Nothing is better than the first year. We will remember this great moment we are going to experience.”

The babies broke the Guiness World Record for the most children delivered in a single birth to survive.

Multiple births are risky and mothers with more than four foetuses at a time are advised to terminate some in countries where abortion is legal.

There are also risks the babies could develop health problems due to their premature birth, such as sepsis and cerebral palsy.

Mrs Cissé and the children are currently living in what their father described as a “medicalised flat” that belongs to the owners of the Ain Borja clinic in Casablanca where the babies were born.

“There are nurses who are here, in addition to my wife, who help to take care of the children,” Mr Arby said.

“The clinic has given them a menu which says what to give them to eat at all times – night and day,” he continued.

The babies were born at 30 weeks  by Caesarean section, according to Mali’s health minister, Fanta Siby. They weighed between 500g and 1kg (1.1lb and 2.2lb), Professor Youssef Alaoui, medical director of the Ain Borja clinic told the AFP news agency at the time of birth.

Their boys are called Mohammed VI, Oumar, Elhadji, Bah, while the girls are named Kadidia, Fatouma, Hawa, Adama and Oumou.

Each one has a unique personality, their father said.

“They all have different characters. Some are quiet, while other make more noise and cry a lot. Some want to be picked up all the time. They are all very different, which is entirely normal.”

Mr Arby also thanked the Malian government for its help.

“The Malian state has put everything in place for the care and treatment of the nine babies and their mother. It’s not at all easy, but it’s beautiful and something that is comforting,” he said.

They have not yet been to Mali, but they are already very popular in the country, their father said.

“Everyone is very keen to see the babies with their own eyes – their family, friends, our home village, the whole country.”

He also has a message for couples trying to have children: “I hope God blesses everyone who doesn’t yet have children – that they can have what we, the parents of nonuplets currently have. It’s beautiful, a real treasure.