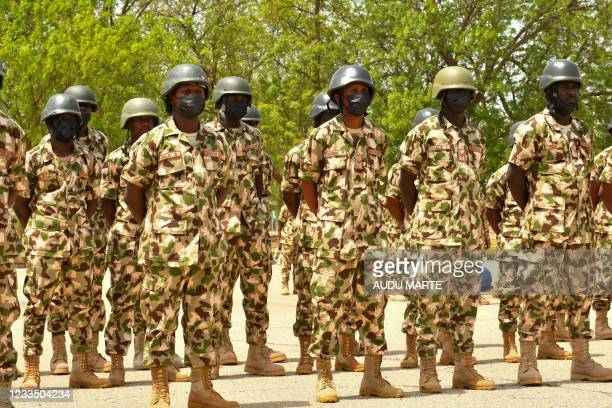 Nigerian Army yesterday said it would go after members of the outlawed Indigenous People of Biafra (IPOB) for the gruesome murder of army couple in Imo State.

Daily Trust had reported how two soldiers, Audu Linus, a Master Warrant Officer, and Private Gloria Matthew, were shot dead and beheaded on Saturday when they were on transit to Imo State for their traditional wedding. Army spokesman, Brig.-Gen. Onyema Nwachukwu, in a statement issued in Abuja, described the killing as “gruesome, barbaric and most despicable”. At least three people have been killed by the Islamic State of West Africa province in Kautikari ward of Chibok Local Government Area of Borno State.

The attack occurred almost the same time as the UN Secretary-General, Antonio Guterres, was visiting Borno State for an on-the-spot assessment of the level of damage done by the Boko Haram insurgency. A villager said the attack started around 6pm and it got all the villagers deserting for safety in the nearby Sambisa Forest where the terrorists camped.

“The attack started at 6:20pm this evening (Tuesday). They came on their motorcycles and started to shoot randomly from all angles.

Army To Establish New Forward Operations Base in Sokoto The Chief of Army Staff (COAS), Lt.-Gen. Faruk Yahaya, on Tuesday performed the groundbreaking for the establishment of a new Forward Operations Base (FOB) Isa, in Isa local government area of Sokoto.

Army spokesman Onyema Nwachukwu, in a statement on Tuesday, said the COAS also had lunch with the troops of Operation Hadarin Daji to mark the Eid-el-Fitr. Mr Yahaya said the initiative to build the new FOB Isa in the eastern part of Sokoto was premised on its strategic importance to the ongoing operations. His Holiness, Pope Francis, has warned Patriarch Kirill, the leader of the Russian Orthodox Church, not to transform himself to be Russian President Vladimir Putin’s altar boy amid the ongoing war between Russia and Ukraine. The Pope also slammed Kirill for endorsing Russia’s stated reasons for invading Ukraine.

“I spoke to him [Patriarch Kirill] for 40 minutes via Zoom,” the Pope told Italian daily Corriere della Sera. “The first 20 minutes, he read to me, with a card in hand, all the justifications for war.

Russian Defense Minister, Sergei Shoigu has warned that Russian forces would destroy any war equipment being transported into Ukraine by NATO and United States.

The minister said this on a conference call in Moscow as reported by the Russian state news agency RIA Novosti.

He repeated the warning that it will consider NATO equipment arriving in Ukraine as a legitimate target, according to RIA Novosti, as quoted by CNN.

Hundreds of students of the University of Benin, Edo State, have trooped out en masse on Wednesday to protest the ongoing strike action of the Academic Staff Union of Universities.

It would be noted that on Tuesday, “The Punch” reported that students equally protested around the University of Ibadan, Oyo State, calling for immediate reopening of public universities across Nigeria.

Agerzua made the confirmation via a telephone call to journalists in Makurdi, NAN reports.

He explained that his resignation had become necessary following the recent political happenings in the state.

His Special Adviser on Media, Ibrahim Lawal, who confirmed the development on Wednesday said Dagogo suffered stomach and chest complications.

Lawal said following the severity of his case, the police hospital referred him to another undisclosed hospital.

The Organisation of the Petroleum Exporting Countries (OPEC) says the ongoing war by Russia in Ukraine is causing huge volatility in the global energy market.

Mr Mohammad Barkindo, OPEC Secretary-General, made the assertion while speaking at the virtual 62nd Meeting of the Joint Technical Committee (JTC) on Wednesday.

Barkindo noted that there were implications and possible far-reaching consequences of the ongoing conflict in Ukraine.

74 aspirants for National and State Assembly seats in the Peoples Democratic Party (PDP) have decried the inability of the party panel to hold an election for the three-man delegate last weekend.

The three-man delegate election, which was scheduled for 30th April was later shifted to 1st May by the Jibrin Ahmed led panel.

The election, however, failed to hold on to the rescheduled date when it was discovered that the panel members came to hold the election without the original result sheet.