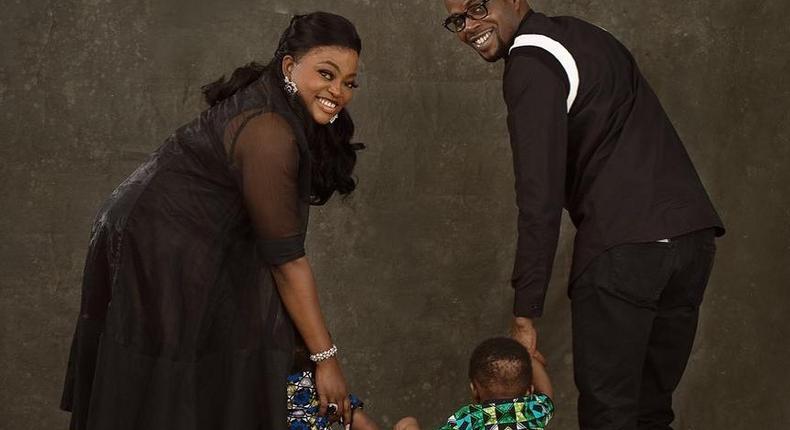 The actress had recently given reasons for hiding the faces of her kids.

Funke Akindele and her husband, JJC Skillz with their twins [Instagram/JJCSkillz]

The photos of Nigerian movie star Funke Akindele’s kids have been exposed by her husband JJC Skillz’s alleged ex-wife.

The lady who claims to be the mother of the music star’s son, Benito, took to her Instagram page with the handle @snoop_mummy where she shared the photos of the twins.

“If you don’t want me to expose your family then don’t expose mine. Funke and Abdul Bello,” she captioned the photo. Funke Akindele’s kids photos exposed by husband’s ex-wife

This is coming days after Benito had alleged that Akindele was a horrible person.

He made this known following reports of crisis in JJC and Akindele’s marriage.

According to the young man, the actress is not who many people believe she is.

He also added that he lived in their house for two years and it was a horror. Nollywood actress Funke Akindele and her hubby JJC Skillz and his son Benito Bello [Instagram/JJCSkillz]

The young man disabled all his social media pages after going public about his stepmom.

JJC later released a post where he downplayed the rumours about the crisis in their marriage.

Funke and JJC Skillz got married in 2016. They welcomed their set of twins in 2018. Funke Akindele and husband

In a recent interview, the actress spoke about the reasons why she has refused to show the faces of her children on social media.

This is the movie star’s second marriage. The mother of two was married to popular Oshodi-based businessman, Adeola Kehinde Oloyede.