Leaders in the South East geopolitical zone have demanded the unconditional release of the leader of IPOB (Mazi Nnamdi Kanu) by the Federal Government. They argued that it would douse the current tension across the Southeast and create an atmosphere for collaboration towards a constructive resolution of the issues.

In a statement issued in Awka, they also implored the people of Anambra State and all religious congregations to join in the prayers, which would take place within the premises of all Cathedrals, Churches and prayer houses across Igbo land by 11:00am.

The leaders declared Monday (April 4, 2022) as a day of prayer for peace in Igbo land and called on the faithful wherever they reside across Nigeria, or abroad to pause and join in fellowship, adding that the prayers were meant to seek the face of God in the zone.

Resign If You Can’t Secure Nigerians-TUC To Buhari.

National President of the Trade Union Congress (Quadri Olaleye) has called on President Buhari to resign his position if he cannot guarantee the security of the people.

Olaleye stated this on Friday in Okene, Kogi State at the burial of the TUC National Secretary Musa Ozigi who was among those killed at the terrorist attack on the Abuja-Kaduna bound train on Monday. 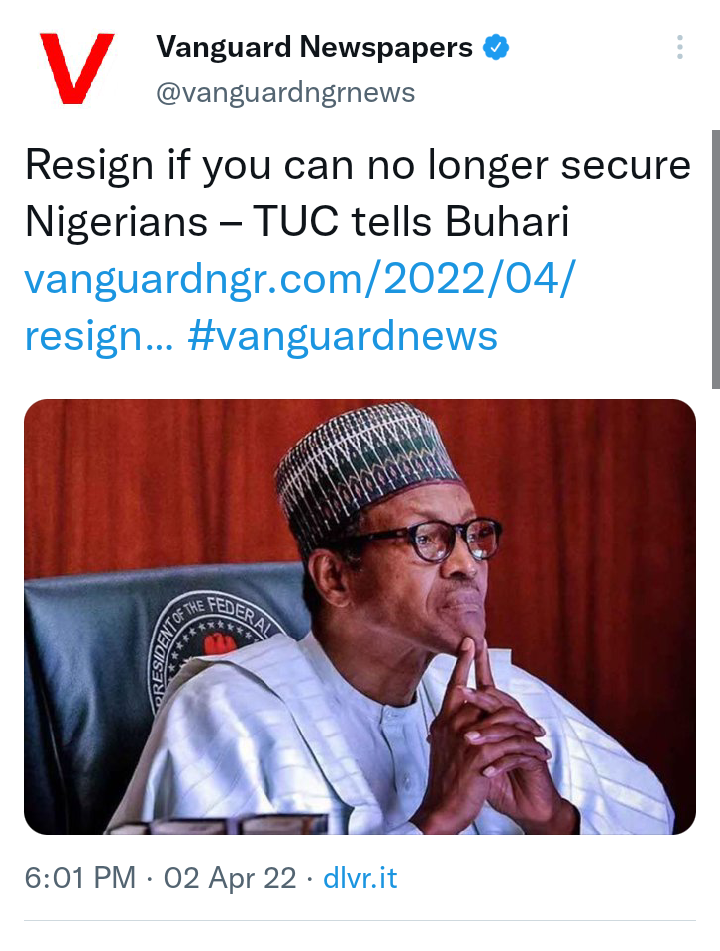 The TUC National President said that President Buhari was elected basically on his electoral promises of tackling insecurity; and so has no excuse for the insecurity that has enveloped the country.

He said the president should either resign or step aside to allow capable hands handle the country.

Aggrieved members of the factional All Progressives Congress (APC) in Kwara have defected to the Social Democratic Party (SPD).

The News Agency of Nigeria (NAN) reported that the defectors are loyal supporters of the two serving ministers from the state (Alhaji Lai Mohammed), the Minister of Information and Culture, as well as Senator Gbemisola Saraki , the Minister of State for Transportation, among other APC cheiftains in the state.

Mr Rasak Alabi (The Kwara South Senatorial Chairman of factional APC group) announced their defection to the SDP on Saturday in Ilorin at a news conference attended by members from the 16 local government areas of the state.

“PUNCH Metro” gathered that Osahon, the Bayelsa State correspondent of The Guardian newspaper, who was kidnapped on Monday (March 28, 2022) by gunmen suspected to be Fulani herdsmen along Patani area of the East-West road, was released in the night of Friday (April 1, 2022).

The information regarding his release was contained on the WhatsApp platform of the Delta State Council of the NUJ, as logged by a member of the Union’s National Executive Council, Chief Festus Ahon. At least five persons have been killed by gunmen suspected to be bandits in Yantumaki, Danmusa Local Government Area of Katsina State.

Danmusa, which is on the boundary of Rugu Forest, is one of the main hideouts for gunmen commonly referred to as bandits.

Residents said the bandits stormed the community on Friday and operated for many hours.

It was learnt that on arrival at the village on motorcycles, the gunmen started shooting indiscriminately, resulting to the death of three traders and two children.

The bandits also abducted traders and customers and escaped with them into the forest.

Katsina, despite being the home state of President Muhammadu Buhari, has witnessed sporadic attacks by bandits and kidnappers that have claimed the lives of many.

Over 700 people have been reportedly killed by the gunmen in Jibia, Kankara, Dutsinma, Musawa, Danmusa and Safana local government areas of the state in the last five months. A townhall between lawmakers from the South East and their constituents tagged ‘Open Square’ is currently holding in Enugu State.

The meeting focuses on addressing citizens’ understanding of the legislature, increasing engagements between lawmakers and constituents, as well as law-making and meeting the peoples’ needs, among others. The Bauchi State Government has released N779.8 million for the renovation of the state secretariat complex.

Yahuza Ningi, the Head of the Civil Service, made this known to reporters in Bauchi on Friday.

He said the renovation was part of the government’s effort to provide a conducive work environment for the civil servants by enhancing their welfare for optimal performance.

He explained that the complex, which was built in 1983, has become a shadow of its former self and hence the need for its general rehabilitation.

Mr Ningi said the renovation work would be executed in three phases, which included the reconstruction of the connecting access road within the edifice, rehabilitation of the electrical works and erection of a perimeter fence. The US Defense Department announced Friday it is allotting $300 million in “security assistance” for Ukraine to bolster the country’s defense capabilities, adding to the $1.6 billion Washington has committed since Russia invaded in late February.