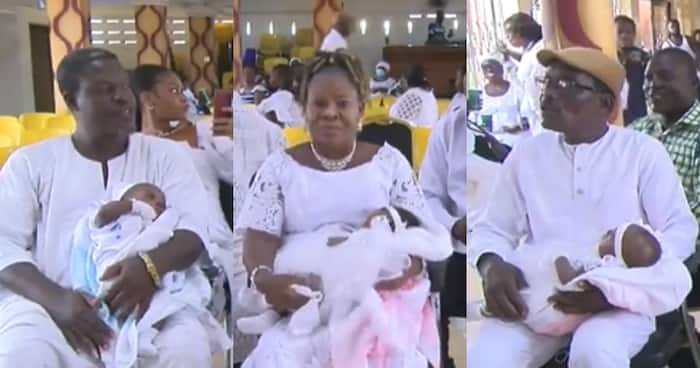 A Ghanaian couple in their 60s have welcomed three babies after 30 years of trying The 62-year-old mother, Ethel revealed that after struggling to conceive for years, she started fertility treatment at the age of 40 but was unsuccessful She revealed dealing with a lot of discrimination from all angles when she was trying for a baby .

An overjoyed Ghanaian couple in their 60s have recently hit the news after welcoming their triplets after years of infertility. The post sighted by YEN.com.gh on the Instagram timeline of Joynewsontv had Ethel, the 62-year-old new mother revealing that she faced a lot of discrimination from people around her and the society in general after struggling to have more children after their first child. She revealed that in an attempt to expand her family, she tried a lot of fertility options from age 40 to 45 to no avail. Read also Proud parents buy 4×4 car for daughter after performing excellently in BECE Ethel continued to trust God for a miracle and remained faithful until she finally received her rainbow babies; Alexander, Alexandra and Alexina.