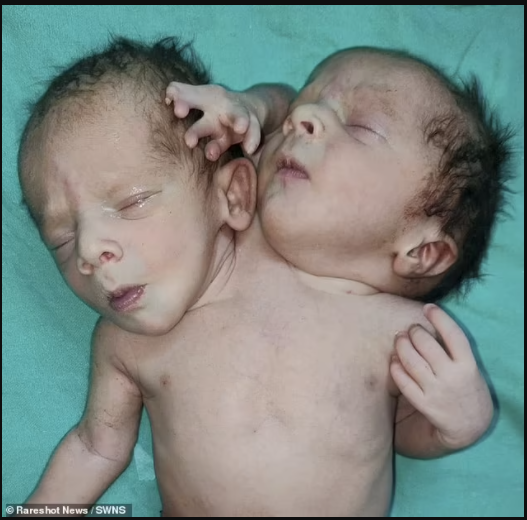 The parents, Shaheen Khan and Sohail were expecting two fully formed twins but were shocked when she gave birth to a baby with two heads on March 28 in Ratlam, in the Indian state of Madhya Pradesh.

The condition is known as dicephalic parapagus, where two infants are joined by one torso – and often results in a stillbirth.

The twins are admitted to a hospital in the nearby city of Indore to be monitored by doctors.

One of the doctors, Dr. Lahoti, said: ‘These kinds of cases are rare and the condition of babies remains uncertain, especially in the initial days.

‘Due to this, we have kept them under observation.

‘We have not planned for any surgery on the patient.’

Twins born with two heads, but sharing one body, are known as dicephalic parapagus – an extremely unusual form of conjoinment which is said to affect only one in a million births.

It comes after a 21-year-old woman delivered a baby with two heads and three arms in 2019, also in India.

Babita Ahirwar and her husband Jaswant Singh Ahirwar said they were shocked when she delivered the infant on November 23 of that year.

Mr. Ahirwar said: ‘We are shocked. It is unbelievable.

‘Everyone is shocked to see them. We cannot believe our child has two heads.’

Mr. and Mrs. Ahirwar, from Basauda village in Vidisha district of Madhya Pradesh, a state in central India, were initially devastated.

The couple had married 18 months prior and were eagerly awaiting their first child.

According to local reports, they were told to expect conjoined twins around the 35th week of pregnancy.

But after a C-section they welcomed a ‘baby with two heads’.

Mrs Ahirwar told a local news agency: ‘It was a mixed feeling when the nurses handed over the baby to me.

‘Initially, I thought it was a twin, but when the nurses removed the towel, I was shocked to see our firstborn with two heads and three hands.

‘All we wanted was a normal and healthy baby, but the almighty wanted to punish us this way. I don’t know why.’

They later vowed to raise the baby the best that they could.