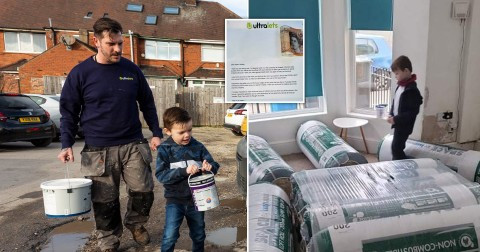 A six-year-old who went to work with his father got paid his first ever wage, much to the surprise of the child .

Tom Hartley, 33, had been struggling to find someone to look after his son Isaac Hartly .

He jokingly told the kid that he would have to bring take him to his work place since he couldn’t get a child care provider.

The suggestion interested Isaac, and and Tom who worked  as a maintenance operative, asked his boss if he could bring his child to work, to which the boss agreed.

After a hard day of work, during which Isaac helped refurbish an empty house, the dad and son were shocked to receive a letter from Tom’s boss, Spencer Wood, thanking the little boy for his ‘excellent’ work and even money as payment for the job he’d done.

In an official letter, accompanied by a £10 note, managing director Spencer wrote:

‘I saw some pictures of the work you did that day when you came in and it was EXCELLENT!

‘You worked really hard, so hard you fell asleep in the van on the way home!

‘Attached to this letter you will find your wages for the work on Tuesday the 8th of February 2022 — make sure you spend it wisely!

‘Thank you so much for helping your dad and the company.

‘It is really important to work hard and focus on school now but when you finish school in the future, it would be great for you to come and show us how good you can be at fixing up houses! Only if you want to though of course.’

‘He asked when he would be able to get a van and work for Ultralets with me, and he tells all his friends he’s coming to work with his daddy.

‘We were working in an empty property and Isaac helped me unload my tools and take them into the house.

‘I went through with him what jobs needed doing. I had to reseal the shower so he helped with that and we also painted a room.

‘I had to fill some cracks in the wall with filler and he had a go doing that and then I took him to McDonald’s for his dinner.

‘I had to go to the office to get some materials and he met everyone in the office, including Spencer. When we had finished, he fell asleep in the van almost straight away.