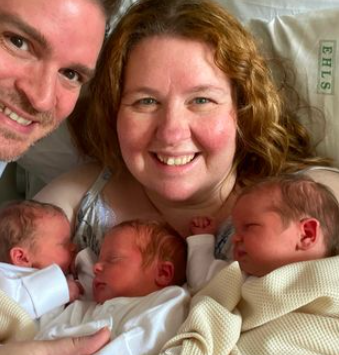 A plus-sized mother has claimed doctors offered to terminate one or two of her babies when they found out she was pregnant with triplets.

Ange, from Somerset, England, gave birth to a daughter in 2016. Earlier this year, she surprisingly discovered she was pregnant with triplets at the age of 38.

However, doctors concerned about her health left her appalled when they suggested she terminates her babies due to her weight.

“Even though I’m healthy and go to the gym regularly, there’s always judgement.”

Ange first got pregnant at the age of 31 in 2015 with her daughter Dottie.

She said: “Doctors were horribly blunt with me. They said, ‘you should not be having this child.’

“They kept talking about the risks of diabetes, high blood pressure and pre-eclampsia, all because of my size. There was such a focus on the BMI scale. It was awful.”

But Ange had a textbook pregnancy. She didn’t develop any of the conditions she’d been warned about, and Dottie was born healthy in February 2016.

Ange loved being a mum and enjoyed seeing her husband Chris, 33, become a dad.

The couple knew they wanted to have another child, so began trying again in 2019.

“But this time nothing happened,” Ange, a creative director, adds.

With every month that passed, the disappointment grew for the whole family.

“Dottie kept asking when she would become a big sister. Every month she’d wish on the moon for a sibling and my heart broke. I wanted nothing more than to make her wish come true,” Ange continues.

After two years of raised hopes and crushing disappointment, Ange knew something had to change.

They decided to stop trying and focus on Dottie instead.

However, things changed early this year.

Ange recalled: “On January 9th, 2022, I was at a friend’s 30th birthday party when I suddenly felt sick. At home, I asked Chris ‘What aftershave are you wearing? It smells disgusting and is burning my throat.’

“Chris took a beat and then replied, ‘You need to take a pregnancy test.'”

The test showed she was pregnant.

A bigger shocker came when she discovered she was having triplets.

“These were the children we’d all waited so long for. They were a miracle,” she said.

Thinking back to her pregnancy with Dottie, she feared what doctors would say at her 14-week appointment.

She recalled: “Concern was all over the doctor’s face. After saying how dangerous it was to have triplets at my size they said, ‘Do you want to terminate one or two of the babies?’

“I replied saying ‘absolutely not!’ and then got really upset when it was suggested again. ‘We’ve told you no,’ I said, ‘I’m not going to terminate any of these children.”

Just like with Dottie, Ange had a straightforward pregnancy. Even at appointments, she was told she was the “most low-maintenance, boring triplet mum they’d ever had.”

She continues: “It was definitely uncomfortable for me as they grew. I got so big that I struggled to eat much or get out of my chair.

“But I didn’t develop preeclampsia or diabetes, or any of the things that they tell you if your BMI is above normal.”

Ange and the babies continued to defy the odds.

Most triplets are born between 27 and 32 weeks, and Ange was still going strong at 35.

“The second I saw them I was overwhelmed by love. They were perfect,” the now mum-of-four says.

She added: “I just want to share my story to give people hope. To show that it’s okay to be a bigger person and still be a mum. And to never give up. As Dottie found, wishes really do come true.”