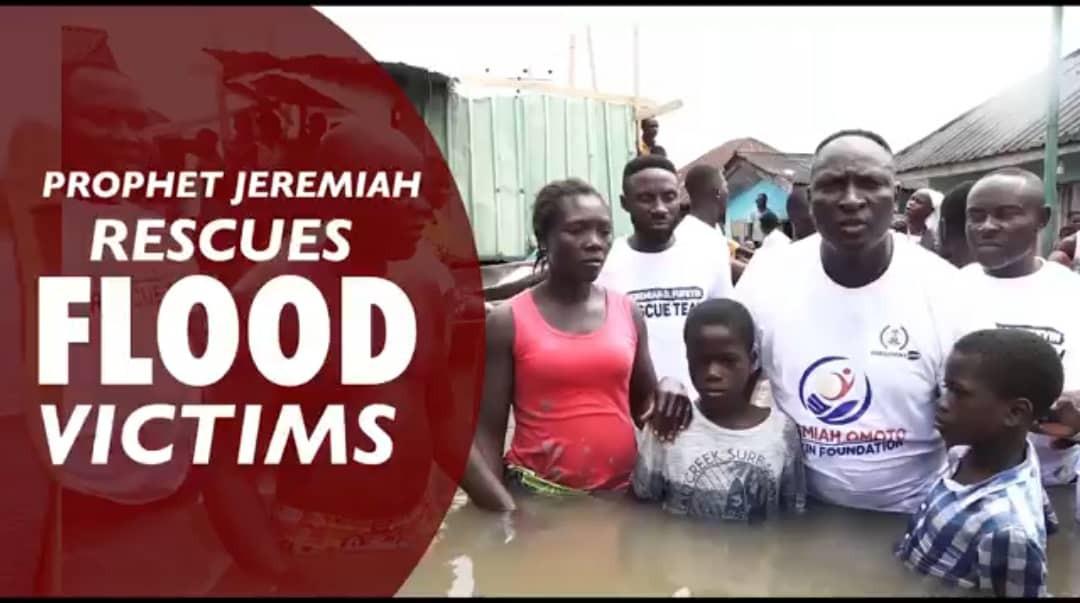 Standing in a flood water and soaking almost to his shoulder was an emotional rollercoaster for a lot of viewers. Founder and General Overseer of Christ MercLand Deliverance Ministry, Warri, Jeremiah Omoto Fufeyin has once again showed his priority for humanity as he recused flood victims and offered N4.5 million to assuage their plights.

Prophet Fufeyin, in a video trending on the internet, rescued over 5000 flood victims while providing temporary accommodation, food, and clothing as flood ravages across communities in Nigeria.

Fufeyin and his team, seen in the video with a white ticket with an inscription, “Rescue flood victims,” visited some of the affected flood states in the country, including Anambara, Delta, Kogi, Bayelsa and others.

Visiting Ayakoromo community in Burutu Council Area of Delta state, Fufeyin had assembled the community with the agreement of the leaders in a town hall providing financial support and evacuating the most affected people into the church facilities. He stressed that they would be cared for and provided temporary shelter until the flood abates the region. This is a very kind gesture and should be appreciated, celebrated and emulated.

The Chairman of the communities, who identified himself as Selman Richard, said Fufeyin was the first person who visited the community since it was submerged.

“We want to appreciate the man of God for coming personally, to see to the sufferings of the people in Ayakoromo community.  No other person has visited,” Richard said after receiving a N2,000, 000 cash gift for the community.

Fufeyin, who decried the suffering the people were going through later added N500,000 bringing the donation to N2.5 million.

Visiting another flooded community, Gbekebo in the same state, the man of God Blessed the people with  N2 Million.

The pastor also supported a woman who had recently delivered a set of twins but lost her husband to the flood even as children and elderly men and women were seen boarding a boat to be evacuated from the flood.

Arriving at the Mercy City, the church provided the victims with food, shelter, medicare, and clothes, as the cleric stressed that they would be feted until they return after the flood.

This is a gesture that should not only be appreciated but should also be celebrated and emulated. God Bless Jeremiah Omoto Fufeyin Foundation.