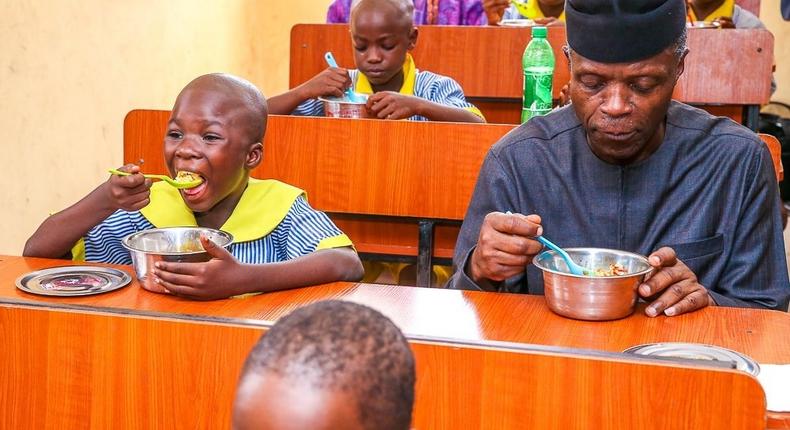 The Federal Government said it spent about 100 million US dollars in feeding 10 million Nigerian children under the National School Feeding Programme.

This was part of efforts to eliminate the scourge of child labour in the country.

Senator Chris Ngige, Minister of Labour and Employment said this when he received the US Ambassador to Nigeria, Mary Leonard and officials of the Department of State, on a courtesy visit on Friday in Abuja.

This is contained in a statement issued by Olajide Oshundun, Head of Press and Public Relations in the ministry.

Ngige said that the Nigerian government had introduced the school feeding programme under its social security programme, to lure children engaged in child labour, back to school.

He said the Federal Government also introduced social protection programmes to fight poverty, which is the major contributory factor to the prevalence of child labour in Nigeria.

According to him, ”we have introduced the National school feeding programme under our social security, to lure children back to school.

“As of today, we are feeding 10 million children across the country. We have spent nearly $10 million on this.

“We have also taken more schools into the areas prone to child labour and made education free in the whole country through the Universal Basic Education and the Child Rights Acts.

“For the people with disability, we introduced Disability Peoples Commission, to give them full and comprehensive aid.

“This is so that they will not feel that they have any disability. If you don’t support someone with disability, it is outright poverty,’’ he said.

The minister however, commended the US Government for the recent technical assistance of the Department of Labour to West Africa.

He said that this was in the area of fighting violence and harassment at work under Convention 190 of International Labour Organisation (ILO).

“Nigeria and Liberia are listed there and the fund is $5 million, estimated to be spent on the project. We think that it is a step in the right direction.

“Just last week, we got information of another $4 million for anti-child labour activities in Nigeria.

“Ondo State was chosen as the pilot state for the fight against child labour in the area of cocoa farming. We think this is a good step in the right direction.

“Because over the years, from the time we visited for African Growth and Opportunities (AGOA) conference under the Department of Labour and Trade in Washington in 2017, we had made it clear that the US Government has to take practical steps for us to follow,’’he said.

Ngige added, ”we can’t be mouthing child labour and we leave it unattended to when we know that most of those engaged in it are those trying to make up for family needs.”

“This is because the family income is not enough, owing to underemployment or unemployment,’’ he said.

The minister explained that advocacy alone cannot reduce the scourge, adding, ”it would be difficult to retain the audience of a hungry person.”

Ngige reiterated his proposal at the AGOA conference that US must assist Nigeria in fighting child labour in the area of capacity building and logistics, among others.

Earlier, Leonard said the US Government was worried to see that Nigerian children were subjected to the worst forms of child labour in quarries, granite and other mining sites.

She assured that her country would continue to work with the Nigerian Government in addressing the scourge and appealed to the remaining seven states yet to domesticate the Child Rights Act to do so without further delay.

The Envoy said, ”the US government was pleased to see a new programme in Nigeria that provides seed capital to vulnerable people to pursue programmes in areas with high prevalence of child labour.”