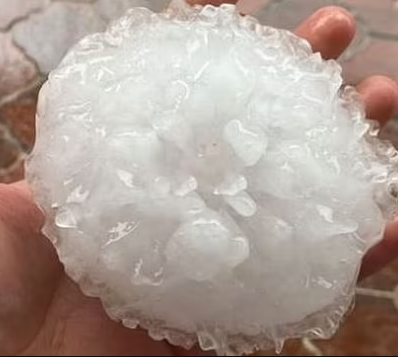 A one-year-old girl has died after being hit by a huge four-inch hail stone during a storm in Spain.

The toddler was one of 30 people hurt after receiving direct impacts from hail stones in and around the Catalan town of La Bisbal de l’Emporda.

She was rushed to Josep Trueta Hospital in Girona on Tuesday afternoon, August 30, but died early Wednesday morning, August 31, as a result of severe head trauma.

A woman remained in the same hospital on Wednesday because of the injuries she suffered in the devastating hailstorm.

Most of the other 28 people who needed medical treatment are said to have suffered head injuries, broken bones, or cuts from the ice that needed stitches.

Many cars and buildings were also damaged by the tennis ball-sized hail stones, with roof tiles smashed and solar panels dented.

Catalan weather chiefs said the hailstones that fell in the area were the largest in twenty years.

The storm began at around 7.30pm on Tuesday, and the 20-month-old girl suffered the deadly blow a few minutes later. The hail storm lasted around 15 minutes.