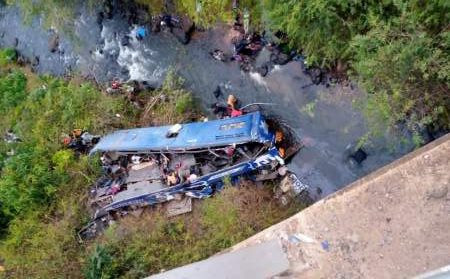 Twenty four people have been confirmed dead, with others in critical condition after a bus travelling from Meru to Mombasa lost control at the deadly Nithi bridge black spot in Tharaka Nithi county, Kenya.

Chari added that they are waiting for the Modern Coast bus official communication to affirm how many people were on board.

“So far we can confirm 24 dead but we cannot tell how many were on board because the transport company has not given us an official communication but we will give clear information in the morning.”

K24TV reported that during a spot check at Chuka Referral hospital, doctors were overwhelmed as they tried to save the lives of those injured, mainly those who are reportedly in critical conditions.

Eyewitnesses also said they expect the number of fatalities to go high. Gitonga, one of the residents, who helped in the rescue mission said;

” It a sad scene we have collected so many bodies and others are in critical condition the number might go higher than 30.”