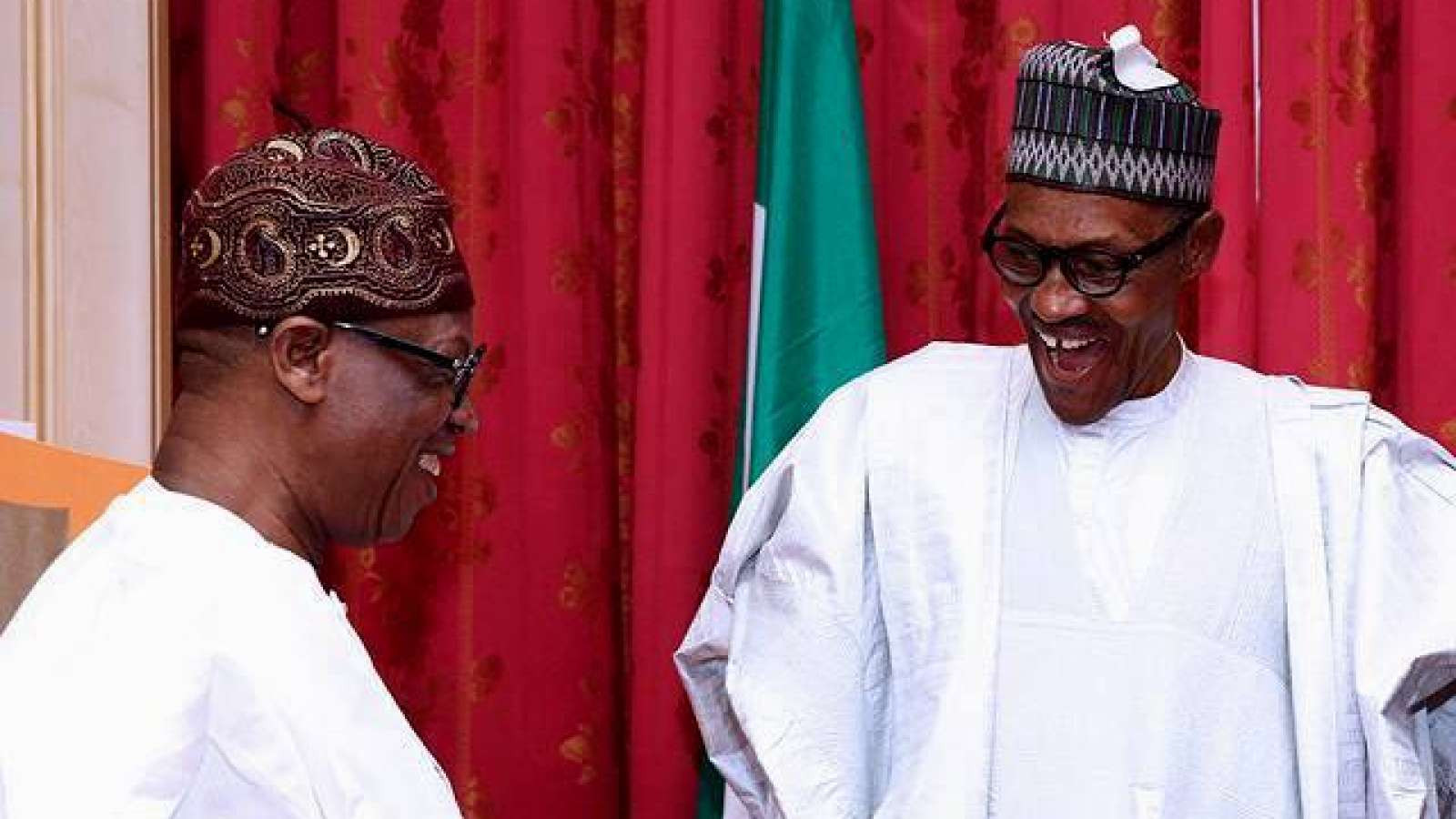 The Nigerian government has suspended the Account-General of the Federation, Ahmed Idris, following his arrest over money laundering and diversion of public funds allegations on Tuesday.

The Economic and Financial Crimes Commission (EFCC) intercepted Mr Idris in Kano on Tuesday and subsequently flew him to Abuja.

The Minister of Finance, Zainab Ahmed, informed Mr Idris of his suspension in a letter on Wednesday.

His suspension is without pay, Mrs Ahmed’s letter stated in the letter dated May 18, 2022.

Ahead of the All Progressives Congress presidential convention, the National Youth Leader of the party, Dayo Israel, has invited all the party’s presidential aspirants to a town hall meeting to discuss their plans for the youths if elected.

Israel in a statement issued on Wednesday in Abuja titled “What do you have for us? – APC Youth Presidential Town” Hall, said the event which will hold in Abuja on Friday 27th and Saturday 28th May 2022, seeks to provide a platform for all the presidential aspirants to share their agenda with the young members of the party.

The APC youth leader said the time has come for the Youth Wing wing to mainstream and prioritize the interest of the progressives youth and by extension the Nigerian youth.

The cause of the inferno could not be ascertained as of press time but our correspondent who visited the scene on Wednesday gathered that there were no electrical connections in the area of the market affected.

About eight lock-up shops were affected and two out of the number were razed with goods inside before the arrival of the state fire service.

It was gathered that the fire incident which occurred at about 9pm did not escalate to the entire market following the efforts of the youths of the area who mobilized themselves to break into some shops and evacuate some goods before the fire was put out.

One of the victims, Mr John Nwabueze who deals in stationery narrated how he lost everything to the fire, lamenting that he does not know the next line of action. The All Progressives Congress (APC) has adjusted its schedule of activities for the presidential, governorship, National Assembly, and state House of Assembly primary elections.

This was contained in a statement issued on Wednesday by the party’s National Publicity Secretary Barr. Felix Morka. The National Publicity Secretary of the All Progressives Congress, Mr. Felix Morka has said the presidential primary of the party has been rescheduled and is now scheduled to hold on May 29th, 2022.

DAILY POST recalls that the primary was scheduled to hold between May 30 and June 1, 2022.

The party spokesperson disclosed this while addressing journalists on Wednesday after the National Working Committee (NWC) of the party.

This was contained in a press statement signed and issued to newsmen in Gusau by the party’s Publicity Secretary, Abba Bello.

The statement said the embattled chairman was suspended for his role in anti-party activities.

It said Mande has been conducting the affairs of the party without the involvement of the State Working Committee, and the leaders of the party.

Former Vice President Atiku Abubakar has visited Kaduna as he continues to woo delegates ahead of the Peoples Democratic Party’s primary election.

Mr Abubakar, interacting with the Kaduna PDP delegates on Tuesday at the party’s secretariat, promised to address issues of power devolution to states and local government areas.

He explained that the federal government was over-burdened and too strong, which he believed by devolving power to states and LGAs, would ease its pressure and ensure effective administration.

I Can Make Nigeria Great If Elected President- Tinubu

National Leader of the All Progressives Congress, Bola Tinubu, has said that he has all it takes to make Nigeria great if he is elected as Nigeria’s president.

Addressing APC delegates at the Banquet Hall opposite Kwara State Government House, Ilorin on Tuesday, Tinubu said that he knows how to solve the various problems facing the country.

He said he has the wherewithal to make Nigeria great again and bring prosperity to all, adding “I can navigate the road to prosperity, I know the road to education because I believe in it, I know the way to tackle the problem of insecurity bedeviling the country.”

He, however, appealed to Nigerians to give him the opportunity to serve by giving him their votes.

Ahead of the May 30 Presidential primaries of the All Progressives Congress, APC, a political pressure group, Save Nigeria-Buhari Ambassadors, SNBA, Wednesday, called on President Muhammadu Buhari to adopt his predecessor, Goodluck Jonathan as consensus candidate of the ruling party.

This is as the group said the call is premised on Jonathan’s enviable qualities as a seasoned democrat who always put the nation’s interest above personal considerations.

Addressing a press conference at the Nigeria Union of Journalists Conference Room, Abuja, national coordinator of the group, Hon. Jazeel Jamil Ibrahim described the former President as a true leader who stands for the unification of the country “as exemplified in 2015 when he shelved his personal ambition to avert a looming crisis, declaring that his ambition was not worth the blood of any Nigerian.

His denial was at the backdrop of reports in some news outlets that he has withdrawn from the race to pave way for the incumbent governor, Sani Bello who would be completing his second tenure of office in 2023.

He described as mischief, the reports that he has withdrawn from the race, noting that those who planted the report were afraid of his growing political popularity, hence, they cooked the fake report ahead of the 25th May 2022 Senatorial primary election.

The Deputy Chief Whip said this in his hometown in New Bussa, the headquarters of Borgu Local Government Area of Niger State when he addressed party delegates and supporters ahead of the party primary.

Many people have been reportedly killed during a clash between traders and commercial motorcyclists, popularly called Okada riders at Dei Dei, a community in Abuja Municipal Area Council (AMAC) of the Federal Capital Territory (FCT).

Shops, houses and vehicles were set ablaze in the violence that ensued, Sahara Reporters learnt.

A source told Sahara Reporters that an accident involving a commercial motorcyclist led to the clash.

Fear has taken over residents of Delta North following the infiltration of members of the Indigenous People of Biafra (IPOB), who went on a rampage in different locations of the Igbo speaking senatorial zone.

Two Dangote trucks were fully loaded with cement, the driver of one of the trucks was killed, and one tricycle burnt while one Audi Volkswagen car was damaged when the group struck at the outskirts of Asaba on Wednesday.

Bandits have attacked commuters along the Abuja-Kaduna highway on Tuesday and abducted an unspecified number of travellers.

The spokesman of the Kaduna Police Command Mohammed Jalige told Channels Television that the bandits had about 4: 20 pm blocked the Audu Ogbe portion of the Highway, near Katari village.

He said they intercepted some vehicles, and during the process, took some persons away to an unknown destination.

A federal high in Abuja has refused to grant bail to Nnamdi Kanu, leader of the Indigenous People of Biafra (IPOB).

Kanu was re-arraigned on an amended 15-count charge bordering on treasonable felony.

However, on April 8, Binta Nyako, the judge, struck out eight out of the 15-count charge.

Gbujie, Ministerial Leader of World Zionist Union in the South-East, made the revelation in a media conference on Wednesday in Awka.

Gbujie, a 65-year old celibate prophet from Akabuo, Ahiazu Mbaise Local Government Area of Imo, but based in Enugu, said that after his emergence, Obi would assume the position of the political arrow head in Southern Nigeria.