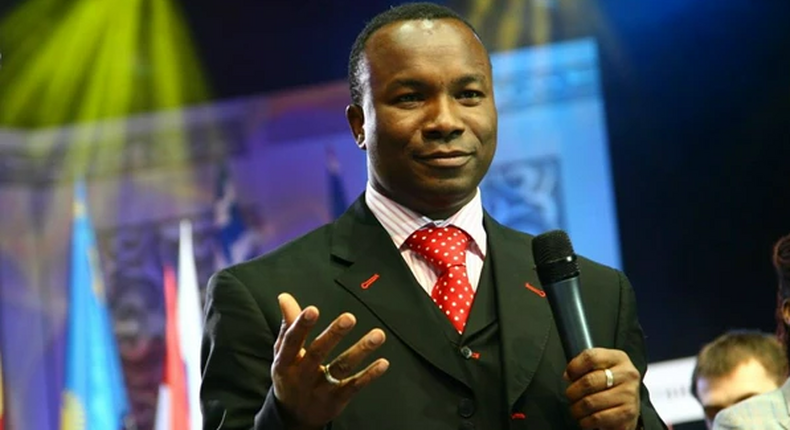 The man of God claimed that he has been a personal enemy of Vladimir Putin for close to 20 years now.

A Ukraine-based Nigerian Pastor, Sunday Adelaja, has made claims that the Russian strongman, Vladimir Putin, placed him on the list of influential people he plans to take down.

Adelaja, who is the founder of the Embassy of the Blessed Kingdom of God for all Nations, took to his verified Facebook page on Saturday, February 26, 2022, to make the revelation.

He stated that he and his family have fled their base in Kyiv, Ukraine’s capital city, to avoid being killed by the advancing Russian forces who have a list of influential people as targets.

Adelaja said despite the Russian incursion, he had planned to send his wife out of Ukraine while he stays back but was made to change his mind after an intelligence report by the US hinted that Russia will enter the capital city.

“I wanted to stay back and send my wife to get out of the country but I got information two days ago that in a few days, the Russians will enter Kyiv.

“From the American intelligence, we got to know that they have a list of people for elimination. These are not ordinary but influential people who have a public opinion and that I am on the list.”

The pastor insisted that he’s aware that Putin has put a target on his back because they’ve been adversaries for close to two decades.

“I know that I am on the list because I was already a persona non grata in Russia since 2005. I have been a personal enemy of Vladimir Putin for close to 20 years now. He banned me from going to Russia, so I know I would be on the list,” he concluded.

As reported earlier by Pulse, the Federal Government through the Minister of Foreign Affairs, Geoffrey Onyeama, had estimated that at least 5,600 Nigerians including students reside in the Eastern European country.

Onyema however ruled out any hopes of an immediate evacuation of the trapped citizens noting that such operations could only be possible after the airports in the Russia-occupied country are reopened.

The Russian invasion has forced over 150,000 Ukrainians out of their country while others are still trying to get out.