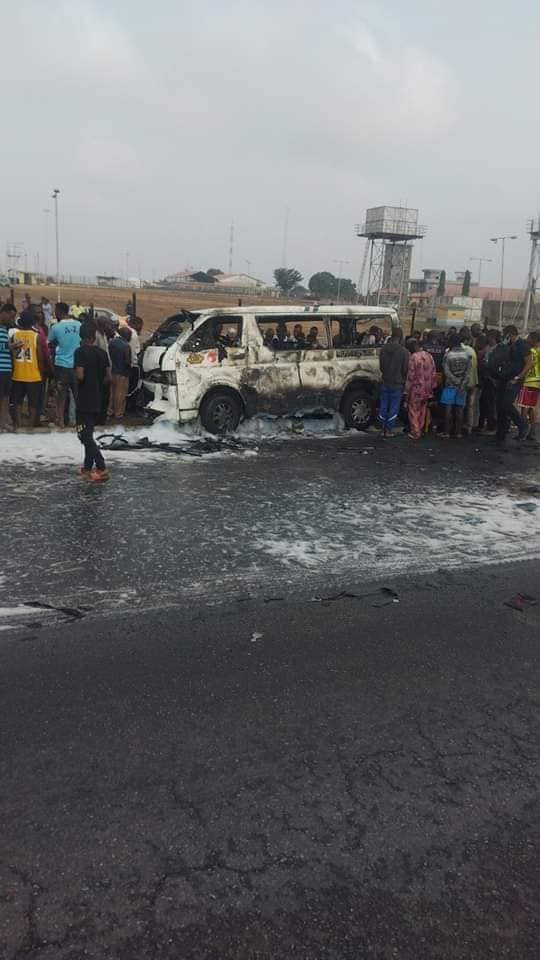 A pregnant woman and eight others have been burnt to death in a road accident in Ilorin, Kwara state.

The accident occurred along the Ilorin International Airport road at about 8:00 am on Sunday, February 20.

It was gathered that one of the vehicles involved in the crash was carrying petrol-filled jerrycans.

Eyewitnesses noted that the Toyota saloon car was driving out of the airport while the Lagos-bound Hiace Bus was on top speed along the expressway before they rammed into each other and the bus went up in flames.

The nine deceased persons were said to have been burnt beyond recognition and their bodies have been deposited at the University of Ilorin Teaching Hospital, while five men sustained various degrees of injuries and are currently receiving treatment at the Ilorin General Hospital.

Three other men inside the saloon car, however, escaped uninjured.

The Sector Commander lamented that the crash was avoidable and therefore, warned members of the public against reckless driving.

Owoade also warned motorists to avoid keeping petrol inside jerricans in their vehicles while driving.

He commiserated with the families of the victims and assured the public that the corps will continue to strive hard towards ensuring that such unfortunate incidents are curtailed on the roads.