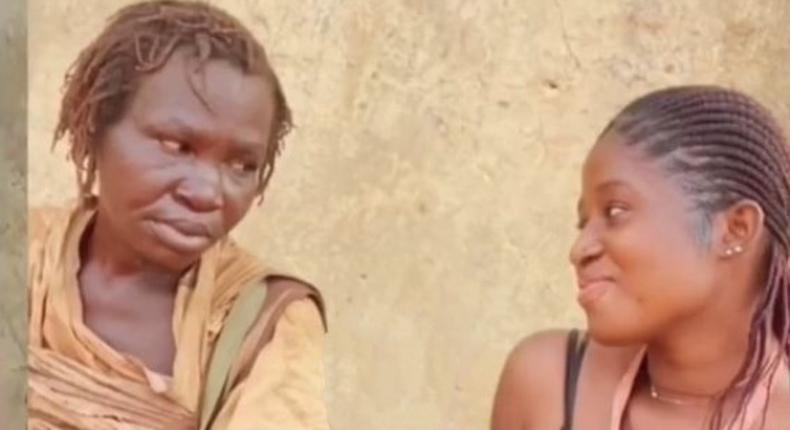 A humbling video of a Ghanaian lady spending time with a mentally-ill woman reported to be her mother has got social media users talking.

Ghanaian lady and a mentally-ill woman

In the video that is making the rounds on Instagram, the lady is seen sitting beside the woman while attempting to interact with her.

With smiles written all over her, the lady handed something in a paper bag believed to be food to her alleged mother before handshaking her hand.

The emotion-triggering video captured the mentally-ill woman walking away after the interaction with the young lady.

Many Ghanaian Instagram users have been commending the lady with some asking her to take her to the hospital for treatment.

Then, abenaoforiwah also said: “Awwwww God bless her in her mum situation she still loves her hmmmm some will ignore her because shy and disgrace”

In another news, double jeopardy has befallen a 65-year-old woman as she was deported from the United Kingdom after 25 years only to realise that her tenant had sold her house.

Identified as Florence Owanogo, the Nigerian woman has become homeless and has to sleep in the streets at the mercy of the weather.

According to a Twitter user @Diixixme, 5th Avenue by 51 road junction in Festac, Lagos has become the resting place of the elderly woman.

In a Twitter thread, the man narrated that he met the woman at the above-mentioned spot and initially thought she was mentally ill. He was then informed that she was alright but had a heartbreaking problem.

He narrated that the woman had spent 25 years in the UK but was extradited to Nigeria. Unfortunately, when she got home, her house had been sold by her tenant, rending her homeless.

He added that although the woman reported the matter to the police, dramatically, she was arrested and detained for three months.

The tweet has triggered numerous reactions with many Twitter users enquiring about how to help the poor elderly woman.