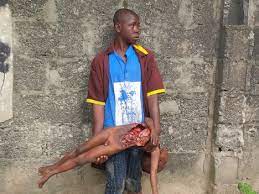 There is no denying that ritualistic killings are taking on several dimensions in the country.

Therefore, the is an impending danger that may lead to the threat that people will face in the future if the federal government doesn’t intervene in ritualistic killings that are happening in Nigeria society.

One important thing about this issue is that it’s the youths that are now very desperate to get rich by all means without having a better or specific job to do.

The bitter truth is that youths are now ready to go to any length to acquire wealth. It is on this basis that I have studied different ways or methods they use in searching for wealth, and some of these means are what I will reveal in this article.

The craze for quick money, fame, and material wealth is driving the inordinate propensity of our youths into despicable and fetish practices like diverse blood rituals, eating of excreta, incestuous sex, spraying money in public for rituals, bathing in public places, eating human body parts, consuming hard drugs and concoctions, walking naked in the open, among other bizarre rituals. We do not need to deceive ourselves. All these mentioned means are still under money rituals, which the youths now tag “Yahoo plus.”

This is an indication that once it becomes difficult to swindle people through the internet, they will plummet into other nefarious means to acquire wealth at all costs. This is why we have been hearing about different means, some of which are some of what has been listed above.

As a result of this, we keep hearing a lot of horror stories about people who were killed in ritualistic ways.

In the last few days, a young man is said to have attacked his mother in Owerri. The mother, whom he had invited to the hotel, didn’t know that her son had chosen her to be consumed as part of a money ritual.

Another brutal killing occurred in Abeokuta, the capital of Ogun state, where it was reported that four boys connived to kill a teenager who was a girlfriend of one of them. Reports have it that she was later beheaded for money rituals. Not all money rituals require the death of people. Some went even further, as the person who was doing the ritual would get a female friend to have sex with him, and then the man who used her for the evil ritual would take all of her money.

This could have even been preferable if that was all, but the case now is different, which is about consuming the fortune spirituality and also consuming the flesh of the victim by decapitating the victim and burning her body for consumption, just as it was revealed by the boys arrested in Abeokuta.

In this way, the Nigerian government must never hide its face from all this carnage, because any act of defiance would result in more egregious acts by the so-called boys who are now ready to do anything just to get rich. The truth is that the Nigerian government needs to make a public statement about the chastisement against ritualistic killings and keep up with the law of giving and taking, which says that if someone kills another person, that person isn’t worth living and should be treated the same way.

It is generally accepted that the leaders have the privilege to make a pronouncement against any occurrence in the land. Therefore, all the people are looking to the government to wade in because the danger that may happen in the future is that if this carnage is not put to a halt today, by tomorrow, killings of humans may even take place in public.