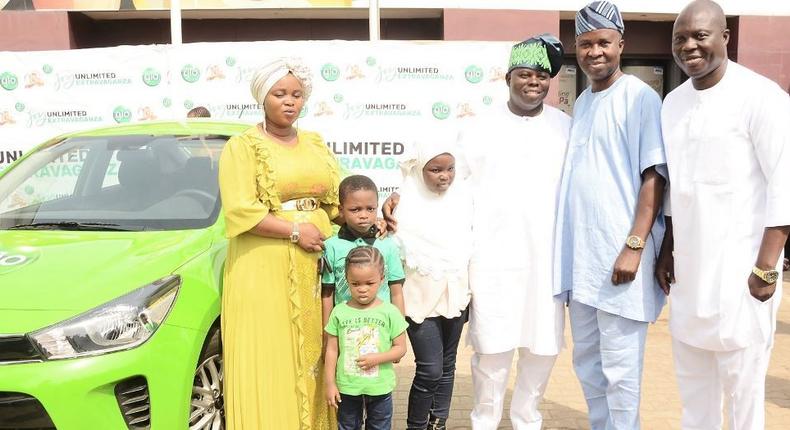 Another female winner of a brand new car in Globacom’s Joy Unlimited Extravaganza promotion emerged in Ilorin, Kwara State capital, on Thursday as 54 subscribers to the network received different prizes they won.

31-year-old Bello Ganiyat, a mother of three, who received the keys to a Kia Rio car at a prize-presentation event in Ilorin became the 3rd female to win a new car in the promo after Confidence Amaliri in Warri, Delta State, and Olamide Aluko in Ibadan, Oyo State.

She expressed gratitude to Globacom for her fortune, saying, “I didn’t believe until I got here this morning and saw things for myself “.

Other winners equally commended Globacom for positively affecting their lives. Oluwatobi George Adebiyi, 33, shepherd in charge of Igbotako Diocesan Headquarters of Celestial Church of Christ, who won a refrigerator said he sees the prize as a sign of more blessings to come his way in year 2022.

Also, Ojewuyi Elijah,33, who won a power generator and Ibrahim Olaleke, 57- year-old winner of a television set, both described Globacom as a company which has shown consistently that it caters for the wellbeing of Nigerians. “Globacom is our own and it has never disappointed us”, they chorused.

Globacom’s Regional Sales Manager in charge of Kwara State, Mr. Tunji Omoworare, said that more winners will emerge in subsequent draws and that they will get their items including brand new cars in other events to be held in Abuja on January 13, Cele- Okota, Lagos, on January 20 and Adeola Odeku, Victoria Island, Lagos, on January 27.

All recharge amounts, physical, electronic, special (4x, 5x, etc.) count towards qualification, and customers can participate in the promo by dialing *611# on the Glo network. “The more the recharge, the more entries a subscriber gets and consequently the greater the chance to win these amazing prizes,” he àdded. Those who attended the event included the General Officer Commanding the 22 Armoured Brigade of the Nigerian Army, Ilorin, Brigadier General A.E. Abubakar; the Kwara State Head of Service, Mrs. Modupe Oluwole; the Director-General, Kwara State Signage and Advertisement Agency, Mr. David Olorunnisola, and the Executive Chairman, Kwara Geographical Information Service, Mr. Muttallib Shittu