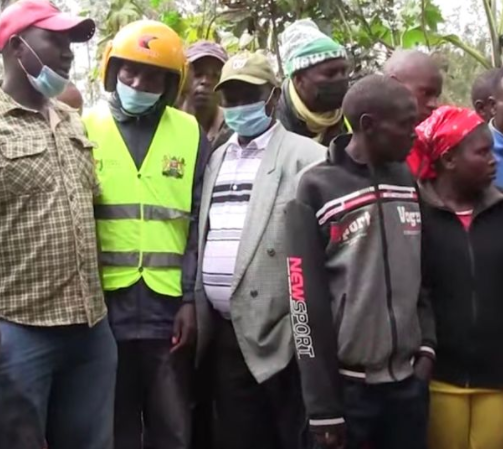 An elderly woman allegedly beheaded her husband during an argument over breakfast.

Margaret Wanjiru, 65, is accused of killing 99-year-old Ndung’u Mugachia around 7.30am on Sunday, September 5, in the village of Kagumo-ini, southern Kenya.

According to police, she started by arguing with her daughter-in-law, who had given Mr Mugachia breakfast.

Catherine Ringera, a police official in the nearby town of Kandara, said: “The husband came out to defend the daughter-in-law and that is when hell break loose.”

Wanjiru then ran for a machete before cutting off her husband’s right ear before slitting his throat, Kenyan newspaper the Daily Nation reports.

Her daughter-in-law, Betty Mumbi, said: “She woke up and started insulting the husband and included me because I was the one serving him breakfast.

“The husband tried to calm her down, but it was in vain, as she dashed for the panga and slit his throat.

“I tried saving him, but she also started attacking me.

She added: “He was lying outside the house as he tried to escape, but she overpowered him and cut off his head.”

Betty claimed that Wanjiru had previously threatened to kill her dad, allegedly assaulting him earlier this year.

Mr Mugachia was already dead by the time police arrived at the scene.

Wanjiru is being held at Kabati Police Station and is due to appear in court.

Mr Mugachia’s body is being kept at Gaichanjiru Catholic mission hospital mortuary, with a post-mortem due to be carried out.

The pair had been married for 52 years and have six children.