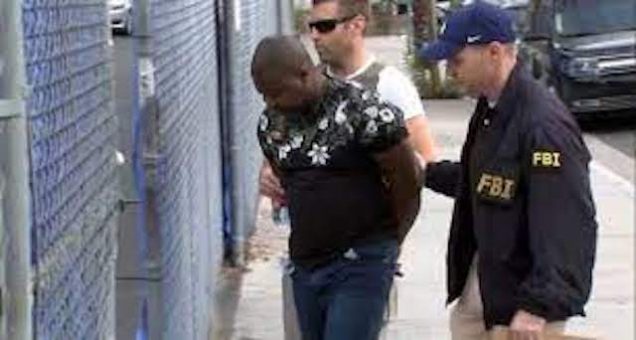 A Ghanaian fraudster, Tourey Ahmed Rufai who fled to Ghana after he was sentenced to four years in prison, was extradited to the United States on Friday to serve his sentence.

The former Bronx resident was arrested in Ghana on 14 April, before he was extradited on 6 August.

Audrey Strauss, the United States Attorney for the Southern District of New York, along with other officials, announced Rufai’s extradition.

It was in connection with his participation in a fraud scheme based in Ghana involving the theft of over $10 million through business email compromises and romance scams.

The gang targeted elderly victims from at least 2014 through 2018.

According to court filings in Manhattan Federal Court:

Between 2014 and 2018, RUFAI, was a member of a criminal enterprise, based in Ghana that was involved in defrauding more than 100 American businesses and individuals of more than $10 million through business email compromises and romance scams.

RUFAI and his co-conspirators received or otherwise directed the receipt of millions of dollars in fraud proceeds from victims of the Enterprise in bank accounts that they controlled in the Bronx, New York.

Some of these bank accounts were opened using fake names, stolen identities, or shell companies in order to avoid detection and hide the true identities of the members of the Enterprise controlling those accounts.

RUFAI, 33, was released on bail shortly after his arrest on January 9, 2018, on conditions including a $150,000 bond co-signed by three individuals, surrender of all travel documents, and home detention with electronic monitoring through an ankle bracelet.

At his trial, he pleaded guilty to conspiracy to commit wire fraud on January 9, 2019.

A bench warrant was thereafter issued for the defendant’s arrest.

On April 14, 2021, after the defendant’s bond was forfeited, the defendant was arrested in Ghana pending his extradition to the United States to serve his sentence.

Manhattan U.S. Attorney Audrey Strauss said: “When a defendant released on bail like Tourey Ahmed Rufai cuts his ankle bracelet and flees the country, it is an affront to the victims of his crimes and the Court.

“Thanks to the extraordinary work of the FBI, IRS-CI, and our law enforcement partners both in the United States and in Ghana, this fugitive was apprehended in Ghana and has been returned to the United States to serve his four-year sentence.”

FBI Acting Assistant Director Jacqueline Maguire said: “Justice will now rightfully be delivered – both to Mr. Rufai as he serves his prison sentence, and to the innocent victims from whom he stole millions of dollars.

Ms. Strauss praised the outstanding investigative work of the FBI and IRS-CI in locating RUFAI in Ghana so that he could be arrested by Ghanaian law enforcement.

He also thanked Ghana’s Economic and Organised Crime Office, Interpol – Ghana Police Service’s Criminal Investigative Division, Ghana National Security, and the Ministry of Justice & Attorney General’s Office of Ghana, for their assistance in the extradition of RUFAI to the United States.

The prosecution of this case is being handled by the Office’s Complex Frauds and Cybercrime Unit. Assistant United States Attorney Sagar K. Ravi is in charge of the prosecution.