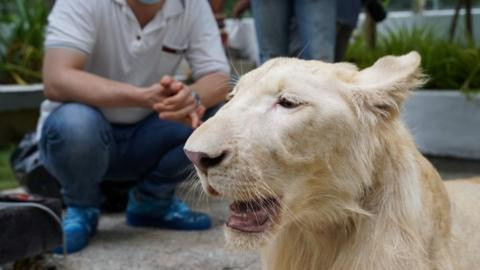 A pet lion that was confiscated by Cambodian authorities last month has been returned to his owner after a surprise intervention by the prime minister.

The 18-month-old male lion was illegally smuggled into the country by a Chinese man, Cambodian officials said.

The officials launched an inquiry in April after seeing TikTok videos of the lion at a villa in the capital, Phnom Penh.

The 70kg (11st) lion was seized on 27 June and moved to a rescue centre by authorities.

Since then the Lion’s owner, Zhai Xinjiang has made social media appeals for the return of the lion.

He said he had raised the issue with Agriculture Minister Veng Sakhon and agreed to have the lion returned to his owner if the animal was kept in a “proper cage”.

He also ordered authorities to reimburse any penalty paid by the owner.

The agriculture minister told news outlet VOA Khmer that the decision was “a sympathetic” one from the prime minister.

In Cambodia it is illegal to keep lions as pets in the country.

Back when the lion was seized, Wildlife Alliance, an animal rescue group that helped confiscate the lion, had said the conditions at the owner’s home were “inappropriate for a wild animal”.

“In addition, the lion’s canine teeth had been removed, along with its claws, which drastically reduces a lion’s quality of life,” the organisation said in a statement last month.

But the owner denied the allegations saying he spent $5,000 a month to rent a special villa just for his pets, many of whom were gifted to his household for safekeeping.