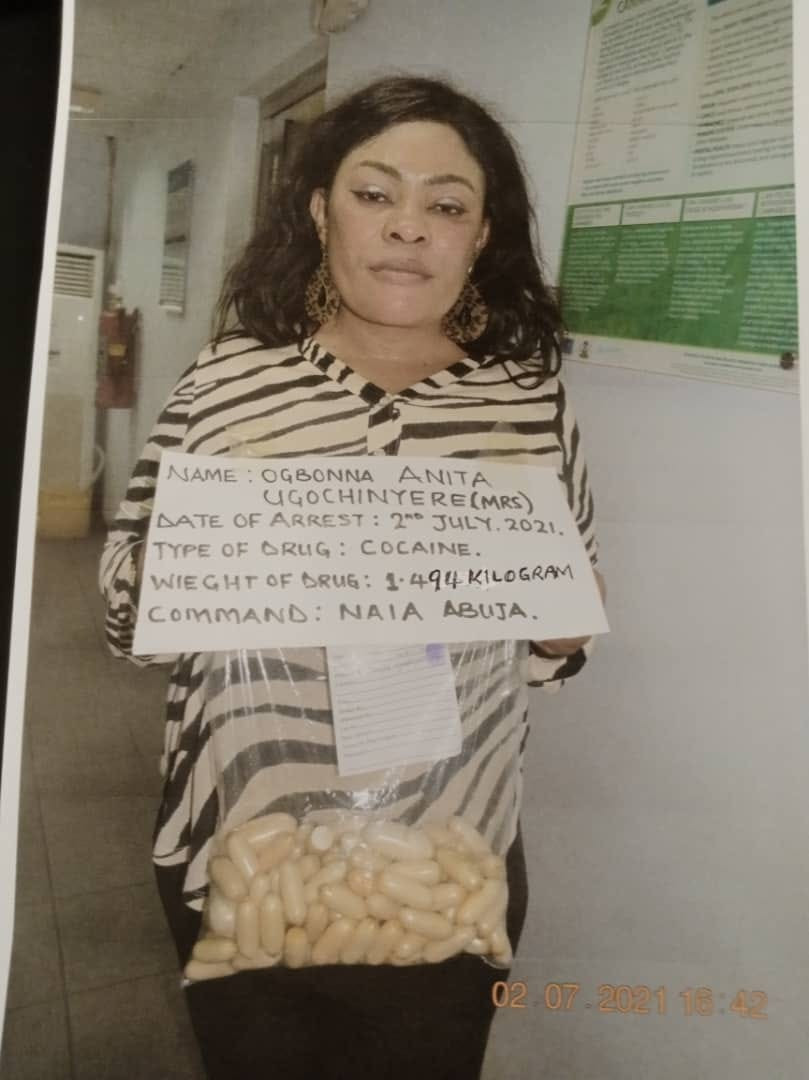 Operatives of the National Drug Law Enforcement Agency, NDLEA, have arrested a Nigerian woman based in Brazil, Mrs. Anita Ugochinyere Ogbonna, at the Nnamdi Azikiwe International Airport, NAIA, Abuja, with 100 pellets of cocaine concealed in her private part and handbag.

NDLEA spokesman, Femi Babafemi, who disclosed this in a statement on Sunday, July 4, said the mother of three was arrested on arrival in Abuja via Qatar Air from Sao Paulo, Brazil through Doha on Friday night, July 2.

“The suspect was arrested on Friday night on arrival in Abuja via Qatar Air from Sao Paulo, Brazil through Doha. Upon a proper search, 12 wraps of cocaine inserted in her private part were extracted while another 88 pellets stuffed in socks were discovered hidden in her handbag,” Babafemi stated.

“During interrogation, Mrs. Ogbonna, who is a mother of three children, all resident in Brazil, claimed she lost her husband three years ago. She confessed she decided to traffick the illicit drug to raise money for the burial of her father scheduled for 22nd July in Imo state,”

“She said one Emeka, alias KC also based in Brazil gave her the drug to deliver in Nigeria for a fee of $3,000. She said she pushed the wraps of cocaine into her private part after her attempts to swallow the pellets failed. The suspect who owns a shop where she sells African foodstuffs in Brazil further claimed she had to drop her three young children with a Kenyan lady who is her neighbour in Brazil before she embarked on the quick-money-journey.” he added.

In a related development, narcotic officers attached to a courier company in Lagos have intercepted 500grams of ketamine concealed in the walls of a wooden box filled with bitter kola that originated from Douala, Cameroon and heading to the United States of America, while another 500grams of methamphetamine hidden in automobile parts going to Australia were also seized at the firm.

Meanwhile, over 410 kilograms of assorted illicit drugs have been intercepted and seized by NDLEA operatives in Plateau and Kwara states. A commercial bus with registration number EKY 184 CQ Lagos was intercepted in Plateau with Diazepam weighing 39kg; Exol-5 tablets weighing 35kg and 1.7kg of Flumtrazepam tablets discovered in the vehicle.

A follow up operation led to the arrest of a drug dealer, Livinus Nnadi at Bauchi motorpark on 26th June, 2021 while on the same day, a blue Sharon minibus with registration number FKG 539 GR, going to Bauchi from Jos was also intercepted and 7.9kg of pentazocine injection recovered from it.

In the same vein, operatives of the Kwara state command of the Agency have recovered 67.2kg of Tramadol heading to Benin republic at a checkpoint close to Ilesha in Osun state while a 53-year-old drug trafficker, Zakiru Abdullahi has been arrested on Ilorin-Jebba highway on Thursday 1st July, with 260kilograms of pentazocine injection meant for Kaduna.

Reacting to all the successful operations, Chairman of NDLEA, Brig. Gen. Mohamed Buba Marwa (Retd) commended officers and men of Abuja airport, Plateau, Kwara commands of the Agency as well as those in the Directorate of Investigations and Operations, DOGI, attached to the courier firms for their diligence and commitment to work.

“Let me again commend all the gallant and vigilant officers and men in these commands and DOGI for their resilience and commitment to the mandate President Muhammadu Buhari has given us in the Agency to rid our towns, communities and even forests of illicit drugs and the criminal elements profitting from the unconscionable trade. With the recent launch of the War Against Drug Abuse, WADA, we must all aim for the ultimate goal of winning this battle sooner than expected. We can and we must.” Gen. Marwa charged.