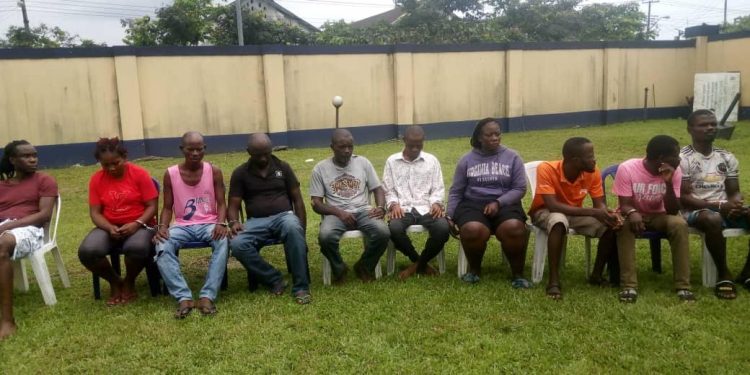 The Rivers State Police Command has paraded 27 suspected criminals, among whom were five kidnappers who specialized in abducting and raping female victims.×

The Commissioner of Police, Mr Eboka Friday while briefing newsmen at the Police’s headquarters in Port Harcourt said operatives of the anti-kidnapping unit arrested the suspects following a tip-off.

He explained that luck ran out of the suspects when they kidnapped one Grace Gomba who was rescued by the Police after four days in captivity.

Some of the suspected kidnappers

Mr Eboka stated that the suspects would be arraigned in court after investigations are concluded.

The CP, while giving a breakdown of the arrests further said that on the 27 of June, acting on credible information on the nefarious activities of cultists operating in Mile 2 Diobu, Port Harcourt, Operatives of “Octupus Strike Force” stormed their camp at Okwelle Waterfront, when they were about to initiate new members.

However, on arrival at the scene, they sighted the Police and a number of them escaped through the River, while five of them were arrested.

He added that on 23 June, Operatives of Anti-Cultism Unit, while on routine Patrol responded to a distress call, where a Birthday party was going on.

The  CP said one Prince Nwonodi armed with a pump action, stormed the venue and disrupted the party.

Arms recovered from them

“He was immediately arrested and confessed ownership of the Joleef Magnum Pump Action gun,” he said.

Recovered from them are 14 arms, 135 cartridges, 6 magazines, 362 ammunition, 2 vehicles, 4 machetes, and assorted charms.