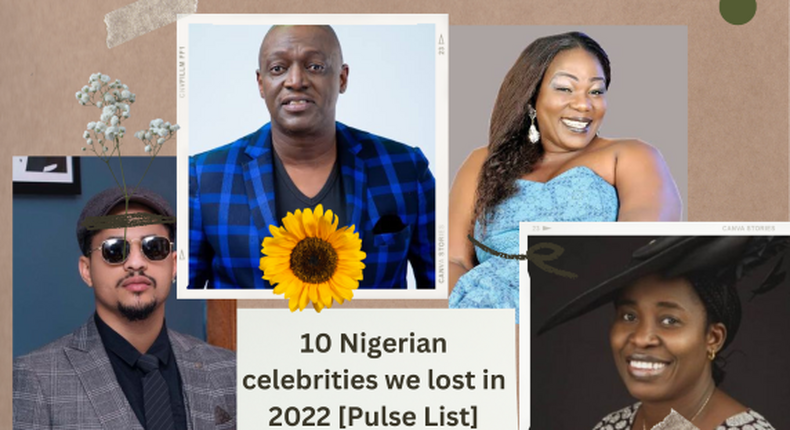 The deaths of these celebrities have left the industry and fans in pain.

Across the industry’s many facets, from actors to singers to reality TV stars, the entertainment industry witnessed several deaths that broke many people’s hearts this year. ADVERTISEMENT

Here is a list of 10 of the many celebrities we lost in 2022, from the Pulse Celebrity Desk.

Okposo passed away in the early hours of Friday, November 26, 2022.

It was first rumoured that the singer slumped and died, but it was later clarified that he died in his sleep.

On Tuesday, December 13, in Lagos State, a praise night was held for him, which was attended by many friends and industry personnel.

Okposo was buried on Friday, December 16, in a private cemetery in Ikoyi, Lagos.

The organisers of the Best of Nollywood (BON) Awards have renamed the best soundtrack in the movie category after the late singer, who took the gospel to new heights when he was alive.

He was 51 years old at the time of his death.

Ameh died on July 17, 2022. According to several reports, the actress was said to have been a guest of an oil company’s top executive and his family when she suddenly slumped during a gathering.

She was reportedly rushed to the NNPC hospital in Warri, Delta State, where she was confirmed dead.

The cast of ‘The Johnsons’ hosted a night of tribute in her honour as the lead actress of the series on Thursday, August 18, 2022, at Freedom Park, Lagos.

A few weeks before her untimely death, the actress revealed that she was going through some mental health issues.

The remains of the movie star were interred at her family’s compound on Friday, August 26.

Following the accident, he was placed on life support, but died two days later.

A night of tribute and a candlelight walk took place at Retro Citi, Victoria Island, Lagos, on October 19–22.

A private service was held at the Methodist Church of the Trinity, Tinubu Square, before he was buried at Ebony Vaults, Ikoyi, Lagos.

Bandele died on August 7. His sudden death was confirmed by his daughter, Temi Bandele, on Monday, August 8, 2022, via a Facebook post.

News of Bandele’s demise came barely a month before the historical TIFF premiere of Netflix and EbonyLife Film’s ‘Elesin Oba’, the adaptation of Wole Soyinka’s ‘Death and the King’s Horseman,’ which he directed and adapted for the screen.

He was laid to rest in a quiet ceremony attended by friends and industry colleagues in Lagos on Friday, September 23, 2022.

Nwachukwu died at an Abuja hospital on Friday, April 8, 2022. Initial reports claimed that she died of cancer, but her death was later alleged to be the result of domestic violence at the hands of her husband.

The singer’s body arrived in her home town, Amakpoke Umuaku community, in Abia State on Saturday, June 25, 2022, for interment.

Nwachukwu, who died at the age of 42, is survived by a husband and four children.

Onayiga died on Monday, July 18, 2022. The movie veteran who played the role of Ireti in Amaka Igwe’s popular soap opera, Fuji House of Commotion, passed away at age 63.

Her death was announced by a renowned movie critic and film specialist, Husseini Shaibu, via his Twitter page.

Onayiga was widely known for her comic role in the now-rested TV drama series Checkmate.’

Alaafin passed away on April 22, 2022. He was the 45th monarch of the Oyo Empire and the traditional ruler of the Yoruba town of Oyo.

The Alaafin died at the Afe Babalola University Teaching Hospital, Ado Ekiti, in Ekiti State, after complications associated with prostate enlargement, according to Premium Times.

He was 83 years old. He ruled the Oyo Empire for 52 years, the longest reign of any Alaafin.

Adetokunbo died on April 1, 2022. He was a Yoruba film comic actor who was widely loved for his hilarious comedic tropes and unique comic style.

It was gathered that the 53-year-old had battled with chronic kidney disease for several years, but he became critically ill in the early hours of March 31.

During his lifetime, the late actor was famed for playing the role of a clown in movies, bringing laughter and joy to his fans across the country and beyond.

Gbadebo died on May 30, 2022. The Yoruba film actor and producer died after battling with an unnamed terminal illness.

The report was made by a fellow member of the industry, Fausat Balogun, on her Instagram page.

Several industry colleagues and fans took to their social media pages at the time to pay tribute to the Nollywood actor and producer.

A service of songs and a wake for the late actor were held on Friday, June 3, at Ijeshatedo, Surulere, Lagos. His burial service and interment took place at the Atan cemetery in Yaba, Lagos, on June 4.

Osmond played numerous roles in the Nigerian film industry and was widely known.

He was 45 years old at the time of his death.

Williams died on February 27, 2022. He was the founding national president of the Actors Guild of Nigeria.

He died on February 27, 2022, after a brief illness. On Friday, April 15, 2022, the AGN and the Artistes Village community commemorated the multi-talented artist’s life and times.

He was buried on Thursday, April 14, 2022, in his hometown, Yala Nkum, in the Ikom Local Government Area of Cross River State.