A Federal High court sitting in Abuja has sacked the former speaker of the House of Representatives, Hon. Yakubu Dogara, declaring his seat vacant.

The judge, D.U Okorowo on Friday ruled that Dogara’s defection from the Peoples Democratic Party (PDP) to the All Progressives Congress (APC) was inappropriate and ordered him to vacate the legislative seat.

All presidential aspirants from various political parties will converge on the State House Conference Centre at 6.30pm on Saturday, April 23, 2022, for a Ramadan Iftar dinner with the First Lady, Aisha Buhari.

In an invitation letter sighted by The PUNCH, the invitees were instructed not to come along with their mobile devices, except their invitation cards which would serve as their entry pass.

Rivers State Governor, Nyesom Ezenwo Wike has lent his support to the stance of Governor Ifeanyi Ugwuanyi of Enugu State that the emergence of a consensus presidential candidate of the Peoples Democratic Party (PDP) should be based on justice, equity and fairness.

Gov. Wike maintained that he solidly stands by Gov. Ugwuanyi’s position on the issue of a consensus presidential candidate of the PDP ahead of the party’s National Convention.

The Rivers State Governor, who is also a presidential aspirant of the PDP in the forthcoming primaries of the party, stated his position when he addressed Ebonyi State PDP delegates at the party’s State Secretariat, in Abakaliki, on Friday.

The 2023 presidential aspiration of the National Leader of the ruling All Progressives Congress (APC), Sen. Bola Ahmed Tinubu got a boost as a serving member of the National Youth Service Corps (NYSC) has donated his remaining monthly allowance as his contribution to the Ahmed Bola Tinubu’s presidential project.

The Corps member, Musa Darazo, who is currently serving his fatherland in Gombe State, spoke to journalists at the NUJ Press Center in Bauchi on Friday, saying that the gesture was his own little way of contributing to Bola Ahmed Tinubu to enable him to purchase the Presidential expression of interest and nomination forms.

The Nigeria Police Force on Friday declared 12 persons wanted over attacks in the Awka North LGA of Anambra State.

The Force Spokesman, Muyiwa Adejobi, in a statement, said the 12 suspects are guilty of conspiracy, murder, armed robbery, terrorism, kidnapping, cultism and unlawful possession of firearms. 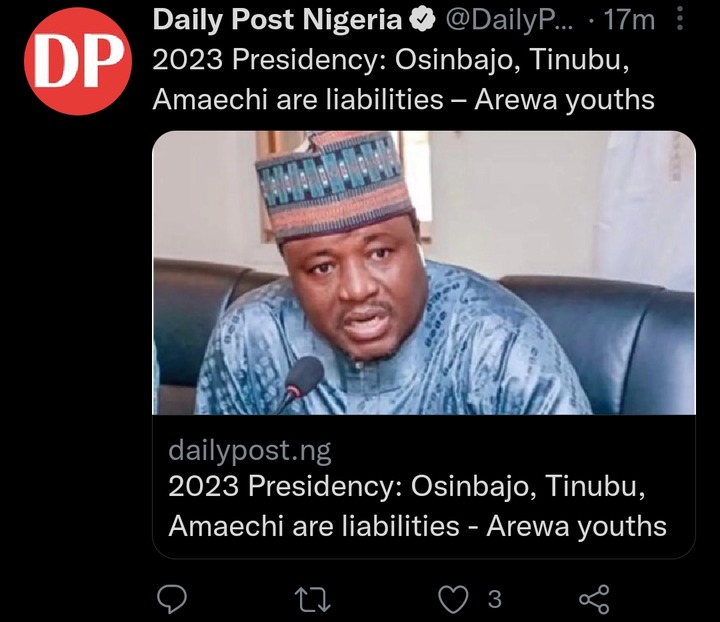 The Arewa Youths Consultative Forum, AYCF, has downplayed the chances of Bola Tinubu, Vice President Yemi Osinbajo, and Rotimi Amaechi emerging as the Presidential flagbearer of the All Progressives Congress, APC.

National President of AYCF, Yerima Shettima, said Osinbajo, Tinubu, and Amaechi are liabilities that should not be taken seriously.

Shettima said Nigerians were yearning for a new breed of politicians, and not the likes of Osinbajo, Tinubu, and Amaechi. 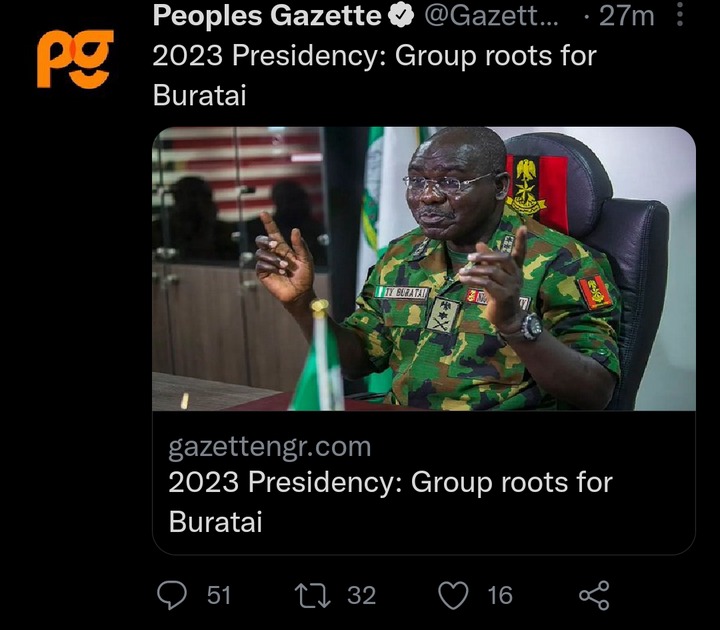 Fusion774, a political support and economic advocacy group, has urged a former Chief of Army Staff and Nigerian Ambassador to Benin Republic, Tukur Buratai, to join the 2023 presidential race.

The National Coordinator of Fussion774, Sediq Jikta, made the call at a news conference on Friday, in Abuja.

Mr Jikta said the call by members of the group was borne out of the security challenges facing the country, saying the threats posed to the nation’s national security had been of immense concern.

He said the 23 years of Nigeria’s democratic experiment had witnessed different threats to its survival such as civil disturbances, which required experienced hands to pilot its affairs.

According to him, Nigeria is currently in very challenging times and it is important to decide on the right leadership, a leadership with the capacity and ability to deliver and make the country work.

The coordinator said the achievement of Mr Buratai as a service chief in the fight against insurgency was a pointer to his sterling quality and qualification to vie for the highest office in the land.

The governor said the reason for the retreat was to bring his team up to speed with what was required of them in serving the public.

Soludo said he aims at getting them to internalise the core vision of his administration, to be able to function well.

Those involved in the retreat are; Commissioners, Special Advisers, Heads of Agencies/Parastatals, Permanent Secretaries and key aides in his government.

Former governor of Lagos State and the current Minister of Works, Mr. Babatunde Raji Fashola is also expected to speak to the appointees on Saturday.