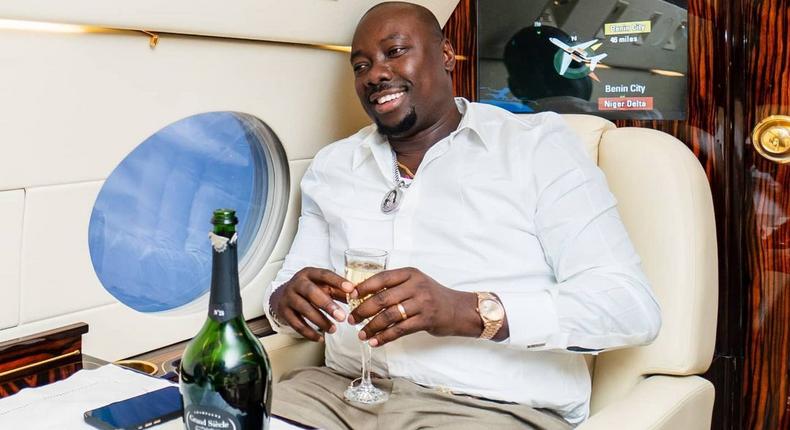 For this article, we will be taking a look at the man who took over the social media space in the country during his late mother’s burial.

If you are a resident of the country’s federal capital territory, Abuja, the name ‘Ibiza‘ may not be strange to you.

For the average Abuja resident, ‘Ibiza’ can be described as one of the pioneer lounges in the city – all thanks to a then very young man, Obinna Iyiegbu popularly known as Obi Cubana.

Obi Cubana rose from not being just a pioneer of the nightlife in Abuja but to one of the richest and most flamboyant men in the country.

For this article, we will be taking a look at the man who took over the social media space in the country during his late mother’s burial.

Obinna Iyiegbu was born on 12th April 1975 in Anambra and hails from Oba in Idemili North Local Government Area of Anambra State. Interestingly, he is the fourth and last child of his now-deceased parents.

The Anambra-born businessman graduated from the University of Nigeria Nsukka in 1998 with a Bachelor of Arts degree in Political Science.

Abuja was popularly referred to as a civil service city with little or no social life. However, in 2006, Obi Cubana established the now popular ‘Ibiza’ lounge located in the Garki district of Abuja.

It is said in many quarters that Obi Cubana struck gold with the establishment of Ibiza. As Abuja fun lovers found a place to unwind.

This was the beginning of many things to come as he went on to establish the popular Cubana Nightclub in the Wuse 2 district of Abuja. Cubana became the yardstick for other nightclubs in Abuja.

He went on to open several other nightclubs across the country including Lagos and Owerri in Imo state. He announced in 2020 that he was working on opening a nightclub in Dubai.

The businessman also owns a large stake in some of the choice real estate businesses and hotels in the country.

Obi Cubana is married to Eby Iyiegbu, a trained lawyer. They have four children together. In July 2021, Obi Cubana shut down the entire country during the build-up to and burial proper of his late mother, Ezinne Uche Iyiegbu.

According to him, his decision to give his former boss 46 cows is was to represent his age.

The burial which was theme ‘The event of the year’ was attended by friends and close associates of the businessman. It was a show of wealth and the extravagant lifestyle of some of the wealthy folks in the country.

The event was so huge that several Nigerian music stars like Davido, D’banj, Phyno and Patoranking performed for the villagers in his small community, Oba.

The first time Obi Cubana made the headlines over a rather strange reason was in 2020 when his former employee and partner, Cubana Chief Priest called him out.

Cubana Chief Priest had made some allegations against his former boss. Despite his social media outburst, Obi Cubana maintained his silence.

In November 2021, the news broke of the billionaire’s alleged arrest by the Economic and Financial Crimes Commission (EFCC). According to reports, he was arrested for alleged money laundering and tax