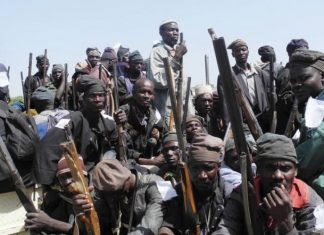 According to reports, a mother, her daughter, and another woman have been nabbed by a team of security operatives while smuggling petrol to bandits in the forest in Katsina State.

The women were apprehended along Katsina-Jibia road on their way to the forest carrying traveling bags concealing Premium Motor Spirit (PMS), otherwise known as petrol.

The arrest was confirmed by the Spokesman, Katsina Police Command, SP Isah Gambo while parading the suspects at the Force Headquarters on Thursday. According to Gambo, the women, who are residents of Malali Quarters in the Katsina metropolis, were arrested with the bags pretending to be normal travellers going to Magama in Jibia, a border town with the Niger Republic.

Explaining their mode of operation, Gambo said the women employ the services of local motorcycle riders to buy the petrol for them in their motorcycle tanks from petrol stations and then take it back to Malali quarters, where they are then siphoned from the tanks and arranged into bags to be sold to bandits

He also said that the women revealed that many female residents in the area are involved in the business.

It is indeed quite shocking to discover that residents are assisting these armed bandits who have brought untold pain, death, and hardship to the people of the Northern region.