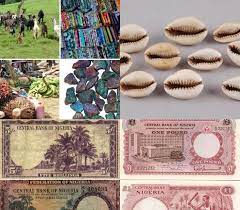 Nigeria has experienced so many changes in their currencies, and there was a time when trade by barter was a means of buying and selling of goods, and after some while the currencies of the Colonial masters was introduced such as Shillings, Pounds and Pence. After some few years naira become the legal tender

In this article today, we will be discussing the list of Nigeria currencies from the Colonial era till date.

Naira was introduced in 1912 to1959 by the west African currency board.

Trade by barter System of trading: It is a mean by which people exchange what they have for what they want.

Cowries: Some years later, cowries was introduced in Nigerian to pay for the goods they purchase in the market

The Nigerian Shillings: Nigeria Shilling was used to pay for good purchases and was introduced in 1958-1959.

The Nigerian Pound: Nigeria Pound was used to pay for good purchases so many years ago and was introduced in 1967

Five Shillings Note: it was introduced in Nigeria in 1968

One Pound Note: Nigerian reintroduced one pound note in 1968

Five Naira Note was introduced in 1973 and it carried the portrait of Alhaji sir Tafawa Balewa.

Ten Naira Note was introduced in 2nd of July 1979, and it carried the portrait of Dr. Alvan Ikoku

The fifty-naira note was introduced in October 1991.

The Hundred Naira Note was introduced on 1st of December 1999 as one of the new generation notes of the Nigerian currency system.

The five hundred naira note is a denomination of Nigerian currency. It was introduced in April 2001, and it carried the portrait of Dr. Nnamdi Azikiwe

One Thousand Nairia Note: It was released 12th of October 2005, with even more advanced security featured. It carries the portrait of Alhaji Mai Bello and Dr. Clement Usong.