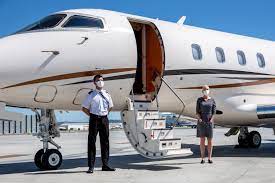 We all know that most celebrities are fond of living luxurious lives. However, as a part of their luxurious lifestyle, some of them have gone as far as purchasing their Private jets. You’ll agree with me that owning a private jet is a status that most Celebrities worldwide dream about. And that’s because it eases their movements from time to time as they don’t have to book flights from commercial airlines. But it’s important to know that private jets don’t come at a cheap price. Most of the private Jets you see many Celebrities riding cost millions of dollars. Aubrey Drake Graham is no doubt one of the best rappers if not the best worldwide. As part of his luxurious spendings, the 34-year-old has already purchased a private jet for himself. Drake owns a Boeing 767 which he named ‘Air Drake’. The 30-seater plane is said to be worth around $185 million without the customization.

Belcalis Marlenis Almánzar AKA Cardi B is undoubtedly one of the most sought-after rappers in the world. However, even though the singer occasionally flies commercials, she still owns a private jet worth around $20 million. Cristiano Ronaldo is arguably one of the best Footballers of all time and for someone of such status, you expect him to be rich. The Portuguese own two Private jets, a Gulfstream G650 and a Gulfstream G200.