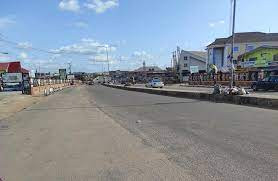 A family of seven consisting of a woman, her five children, and her policeman lover have been found dead in their home in Ogbeso via Oke-Suna area, Apomu town in Isokan Local Government Area of Osun State.

Residents of the area woke up on Tuesday morning August 17 to find all seven persons dead while one survivor was rushed to the hospital and is currently receiving treatment.

According to a resident of the community, it is believed that a chemical was sprayed on them.

“They are eight in number, father, mother and their six children but the children don’t belong to the man. The house belongs to a woman. The man has his own house but lives with the woman.

One of the children just came back from Lagos yesterday. It was said that a chemical was sprayed on them because some people said they perceived the odour coming out.

One of them did not die and was taken to a private hospital in Apomu. The man is a Policeman, named Saheed. He stays in Apomu but he is not from Apomu. He only married the woman that owns the house that the incident occurred.”a resident said

Confirming the incident, the spokesperson of the state police command, SP Yemisi Opalola, said the remains of the deceased persons have been deposited at the Obafemi Awolowo University Teaching Hospital morgue for autopsy to be conducted on the