Suspected political thugs on Saturday, October 12th stormed the Benin home of the National Chairman of the All Progressives Congress, Adams Oshiomhole.

The All Progressives Congress (APC) has now condemned the attack and urged the Inspector General of Police (IGP) Mohammad Adamu and other relevant security outfits to investigate the incident and prosecute the sponsors and attackers.

“Although, the APC National Chairman has rightly called for calm after the apparent attempt on his life, we call on the Inspector General of Police (IGP) Mohammad Adamu and other relevant security outfits to investigate the ugly incident and prosecute the sponsors and attackers. 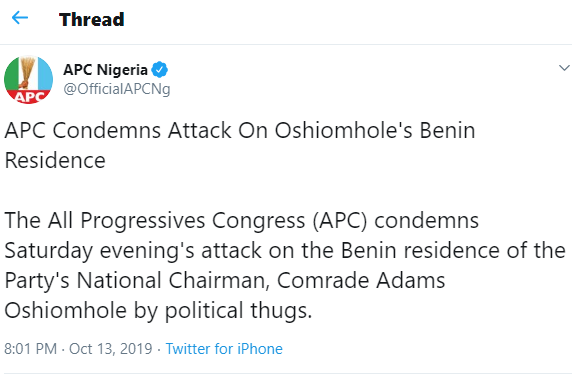 “In Edo State, just as in any other state, everyone must be free to go about their normal and legitimate activities without harassment, intimidation, threat to life and property.

“It is clear that the sponsors of the attack are bent on causing crisis in the state in pursuit of their desperate and unpopular political interests. Human life is greater that anyone’s political ambition”, the party said in a statement by Lanre Issa-Onilu, the national publicity secretary.

Some reports said the miscreants were mobilised to Oshiomhole’s house where they threw verbal attacks on the politician and a former trade union leader, chanting ‘Oshiomhole Ole Oshiomhole Ole’. The mob and a counter one mobilised by Oshiomhole’s supporters were however dispersed by anti-riot policemen.