Its not the best of times for Senator Dino Melaye who lost the Governorship election ticket to Engr Wada today.

Musa Wada, a younger brother of the immediate past Governor Idris Wada, who also contested for the ticket, scored 748 votes to clinch the party ticket and emerge flag bearer for the November 16 governorship election. 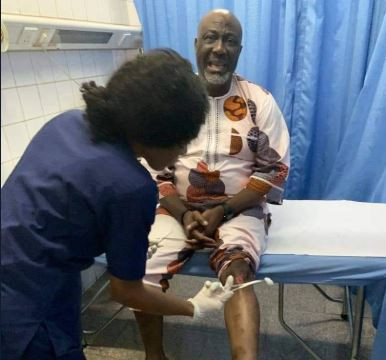 He was closely followed by Abubakar Mohammed Ibrahim, the son of a former governor, Ibrahim Idris (Ibro), who polled 710 votes. The immediate past governor, Capt. Wada, came third with 345 votes while Senator Melaye polled 70 vote to emerge fourth.

Dino Melaye who is yet to make any statement since the result got released sustained injury during the violence that broke out during the primary election.

Dino Malaye Scored 70 Votes , Sustain An Injury And Cried Out That His Mandate Has Been Stolen ???

PDP In KOGI Simply Said No To Dinophobia

All I See Is VICTORY For Gov YAHAYA BELLO @Mr_Allwell pic.twitter.com/cGpJm3QC5j

Sure way to know he’s a Nigerian. ? pic.twitter.com/MMj1pZm9C5

Dino was beaten both literally and figuratively. Incidentally, like his leader Saraki, he came third in a PDP delegate primary. Silver lining their

PDP and violence. Are like Bread and Agoyin Beans

This is the PDP KOGI PRIMARIES.

The normal way of electing their own leaders.
Dino and Wada boys with their customized toys.
#KogiPDP
#KogiPDPprimaries